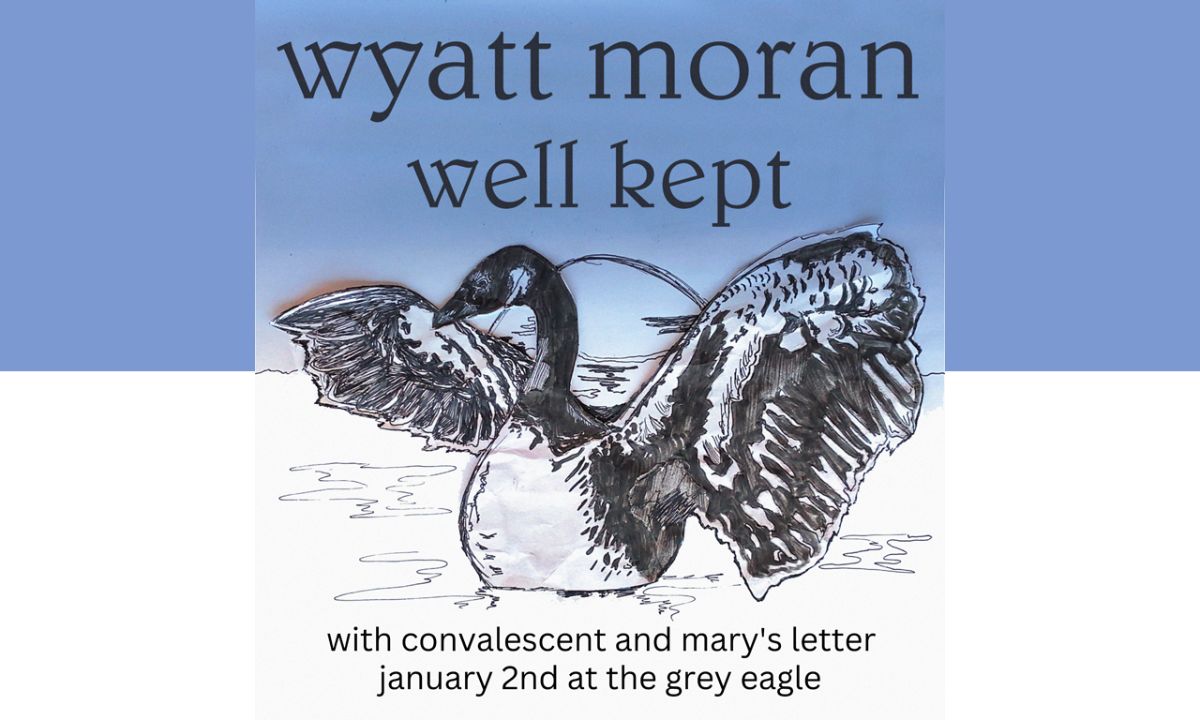 Raised in the driftless north of Minnesota, Wyatt Moran has become an underground mainstay in the folk and indie rock scenes of the Twin Cities. Playing such legendary venues as 7th Street Entry like many before him, Moran has been inspired by the countless names and faces that have walked across those very same stages.

From finger-picked guitars to heavy indie rock instrumentals, Moran’s music spans many genres but his intentions are always clear: write songs with integrity that people can connect to. Explosive and crushing drums lurk behind Moran’s cyclical baritone guitar riffs. Bass lines float in and out of focus as Moran’s voice carries his emo-adjacent style of songwriting.

Moran currently lives in Boston, MA where he is finishing his undergrad program at Berklee College of Music, but regularly returns to Minnesota to play, record, and perform his music. With two national tours under his belt and another being planned for winter 2022, Moran plans to record his debut record in January 2023, with plans for a west coast tour and record release in the summer/fall of the same year.

WELL KEPT
Well Kept is an alternative rock band from Athens, GA, harnessing a potent combination of modern indie rock and classic emo. Originally formed in 2019 as the songwriting vehicle for Athens producer Tommy Trautwein, Well Kept has blossomed into a 5-piece band that is just as imaginative in the studio as they are powerful onstage. Their new record The Inquirer was self-produced by Trautwein and features a denser and more detailed sound, filled with both honest and reflective songwriting and the type of hooks that have fit in smoothly when Well Kept has shared bills with modern pop bands like Dayglow and COIN. With The Inquirer, Well Kept appear to be on the cusp of thrilling change, having proven they can craft ambitious widescreen rock songs without losing the intimacy of their home recording roots.

CONVALESCENT
Drawing from emo, pop punk, and Americana influences, Convalescent strives for raw, honest expression through music. Officially bearing the moniker since 2019, songwriter Joel Ragan has been writing and performing in Asheville since 2012. Convalescent’s six-song EP “I Swear I’m Trying” touches on themes of motivation, hopelessness, and questions about the meaning of life.

MARY’S LETTER
Seamlessly blurring the lines between 2nd wave emo acts and post rock songwriting, Mary’s Letter is a unique blend of heart on the sleeve lyricism with patient buildups and climaxes. Maintaining a sense of pop sensibility, the Asheville 5 piece manages to create sonic soundscapes which evoke intense emotions out of the listener, without losing a sense of accessibility.