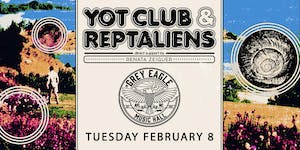 iCal
Google
Yot Club and Reptaliens visit Asheville NC for a stop at The Grey Eagle on February 8th. All ages show at 8pm and Renata Zeiguer opens.

Ryan Kaiser, the Mississippi-raised, Nashville-based musician known as Yot Club, didn’t even have TikTok on his phone when his track “YKWIM?” went viral on the app. For Kaiser, who writes, records, mixes, and masters every song he releases independently, TikTok fame and the accompanying streaming boost (“YKWIM?” now counts over 100 million streams on Spotify) came as a shock. Soon, almost every major label in America was making him offers that would gouge Kaiser and steal his work.

These are fitting pieces of the hyper-american, overly commercialized machinery that inspired Yot Club’s new EP, Santolina. The record’s six tracks map the terrifying, carefully-manicured haze of American suburbia, based in part on Kaiser’s childhood spent in the suburbs of Jackson, Mississippi. This unfolds across lo-fi jangle-pop, indie rock, bedroom synth, and new wave, with occasional disco and instrumental flourishes. It’s all framed with a Wes Anderson whimsy, a pull to the idiosyncratic and deadpan while maintaining a vivid emphasis on the visual.

“The suburbs are a shitty place to be from, but they’re not at the same time,” says Kaiser. “I was fortunate to be from a place where kids were playing baseball in the streets and building clubs in the woods, but as you get older, you gain a more bleak perspective on everything.

That’s the whole vibe of the EP really.” The title nods to the proposed Santolina development in New Mexico, which promises flawless suburban streets and identical houses while sucking local rivers dry to sustain the desert community.

Kaiser was raised in Madison, just outside Jackson. Without TV or video games, he distracted himself with his dad’s college boombox, flipping through his parents’ CD collection. That led him to discover grunge and ‘90s alt rock; early favorites included Grandaddy and The Meat Puppets. “That showed me early on that music didn’t have to be clean or polished for people to enjoy it,” says Kaiser.

At eight years old, his parents took him to a pizza place on Halloween where a live band was playing, including a guitarist wielding a red strat, dressed as Freddy Krueger. “It was the coolest thing I’d ever seen in my life,” says Kaiser. He begged his parents for a guitar. They finally rented him one, and after guitar lessons, he taught himself to play piano, bass, and drums. At 12, he started recording on his family’s computer via GarageBand. By college, he was faking his way into making beats for local friends by watching YouTube videos and scrambling up a DIY knowledge of Logic and Protools.

Kaiser began releasing music as Yot Club in 2019, when he moved to Hattiesburg, Mississippi for college. At the time, he had three jobs—two in restaurants and one as a pool boy. Between working and 18 hours of classes per week, he’d make songs for fun. Unsolicited playlist features and weekly bar gigs encouraged him to focus on music, so he dropped his jobs and focused on music. But Yot Club was never meant to be a viral sensation. “It’s hard to put into words, but I don’t wanna be viewed as a product on a shelf,” says Kaiser. “I don’t really have hobbies outside of music. I watch trash-ass TV. I’m not trying to be a salesman, I’m just trying to be myself.”

Santolina begins with lead single “Alive,” with clean, chiming guitar riffing as open and broad as the plains before Kaiser’s vocals enter: “Straight lines, cul-de-sacs, white flowers and the TK/Bring back memories you’d rather just leave dead.” Second single “It’s Easy” unfurls under a sedate, kaleidoscopic spiral of synths and a subdued drum machine beat, while Kaiser’s vocals, spacey and apathetic, lurk like a Gen Z Lou Reed. Third single “Deer Island,” a spritely morning gallop of drum machine and easy-going guitars, namechecks the titular piece of land off the coast of Biloxi, MS. It’s the last piece of something before endless miles of nothing, a tiny, fragile holdout in the clutches of the Gulf of Mexico.

On Santolina, Kaiser presents a record not avoidant of but rather in conversation with all those things that make modern America a hulking, unsustainable—but somehow still beautiful—weirdo wasteland: TikTok, corporatism, beige sandstone homes, private desert communities, manicured lawns, suburban surrealism. All in between are the people trying to make sense of it all. Yot Club is right there with you.

Reptaliens are ready to be direct. After exploring surreal realms of high-concept synth-pop across two acclaimed albums, the Portland, Oregon, duo found newfound clarity in a stark, grounded approach. That may seem unexpected for such a colorful act—known for heady lyrics about conspiracy theories and transhumanism—but Cole and Bambi Browning have streamlined to the lean, propulsive essentials on their self-produced new LP, Multiverse.

Shelving the dreamy synths altogether and working without their other bandmates due to lockdown, Reptaliens reset, picking up their guitars and emphasizing the catchy attack that’s been there all along. Drawing inspiration from the spontaneous energy of the ’90s alternative canon, the pair hit a surge in momentum after a casual-turned-revelatory listen to Jane’s Addiction’s 1990 classic “Been Caught Stealing.” Without even aiming to make a Reptaliens song, they wound up penning the set’s lead single “Like a Dog,” a sun-soaked groove-bomb that’s blissfully unencumbered by sonic baggage. “That really kicked it off,” Cole recalls. “It was so fast and easy and fun that we said, ‘Let’s do more like that.’”

Oregon natives Bambi and Cole started Reptaliens in the mid-2010s as a multi-faceted vehicle for their most adventurous urges. Across their first two Captured Tracks albums —FM-2030 (2017) and VALIS (2019)—they established themselves as dedicated dreamers and deep thinkers, filling their wooly, homespun synth-pop with meditations on outré science fiction and philosophy. With some help from friends, they’ve been able to tackle big questions and explore vast sound worlds. Tapping Julian Kowalski (guitar), Bryson Hansen (synth), and Tyler Vergian (drums) for their previous albums and shows, Reptaliens have bewitched crowds during extended national tours with STRFKR, Turnover, and Turnstile.

By contrast, and somewhat by necessity, Multiverse brings those lyrical concerns closer to home. “I didn’t get lost in these worlds like I normally do writing lyrics,” says Bambi. “It was way more reflective of the world around me.” And so past source material like cults and Stockholm Syndrome gave way to more immediate muses—like the pair’s frequent recording companion, a Labrador/pit bull mix named Hambone. Meanwhile, the music grew in a fresh direction, a jangle-prone timeless form of subtly psychedelic guitar-pop, finding occasional dark cul-de-sacs but ultimately tending toward the light and breeze.

Recording at home on the sleepy west side of Portland, with deer and woodpeckers regularly popping into their tree-lined backyard, the duo played all of the instruments themselves this time. The result is a departure that in fact only emphasizes the band’s melodic gifts. While Bambi’s distinctive bass-playing is more direct and driving, her airy vocals preserve Reptaliens’ soft-focus otherworldliness. Even when she’s singing about something as relatable as losing touch with her mind and body during isolation on “I Feel Fine,” there’s still an uncanny edge to her delivery. And so lines about sniffing glue and melting into the couch become reality-bending evocations of normal lockdown anxieties.

With mixing duties divided between Mikaelin “Blue” Bluespruce (Solange, Blood Orange, Mariah Carey) and Ross Brown from Kansas City bands Shy Boys and Fullbloods, Multiverse is a crisp pop record packed with surprising flourishes, from the crunchy chorus of “I Can’t Hide” to the smoky, serpentine guitar solo on “Jump.” On the recording front, Bambi and Cole applied lessons learned from making their 2020 EP, Wrestling, a synth-steeped darkwave detour that was the duo’s introduction to working alone from start to finish.

Those releases represent just two of the creative planes nested comfortably within the wider Reptaliens sphere, a prismatic notion that inspired the album’s title. Striking out into refreshing new directions at every turn, like its creators, Multiverse indeed feels like a symbolic crossroads. And one that only yields more possibilities with each visit.

Renata Zeiguer is a Brooklyn-based multi-instrumentalist singer-songwriter, the daughter of Argentinean and Philippine immigrants. An NYC native, she grew up playing classical and jazz music, beginning on the violin and the piano at age 6, and listening to her grandmother play ragtime and tango music obsessively on a baby grand during family visits in Buenos Aires.

She began writing music as a kid, with mostly instrumental compositions that evolved from hourslong improvisations while seated at the keys after school. Initially drawn to composers like Prokofiev and Debussy, she grew to like songs that could be sung, falling in love with the great early 20th century American jazz standards, Brazilian tropicália, and the Beatles.

Her music is both wonderfully dreamy and strangely dark – there is an ambiance that exudes a kind of dreamlike exotica, a “timeless portal where Les Paul and Mary Ford meet Os Mutantes and the Pixies.” Some may hear a sort of weightless negative space where Joe Meek’s “I Hear a New World” meets Kate Bush (Chad Depasquale, Aquarium Drunkard).

Released on Northern Spy Records in 2018, Renata’s debut album ‘Old Ghost’ is the sound of someone finding and losing herself in the endless dance of fear and forgiveness. Co-produced with longtime collaborator Adam Schatz, the album scopes psychological themes of depression and anxiety all the while remaining melodically and harmonically uplifting, adventurous, and ultimately reassuring.