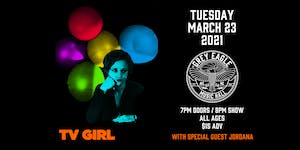 “On the surface, TV Girl is a sunny, throwback splash of ‘60s French pop and southern California soul. Yet, under that shiny veneer lays a dark heart, beating with sharp wit and cynical alienation, and the music is all the more alluring for it. TV Girl, comprised of Brad Petering, Jason Wyman, and Wyatt Harmon, was formed in 2010 by Petering as an outlet to blend the love of Spector-esque girl-group pop with an emerging interest in hip-hop. Featuring shimmering vocals and sampled beats, the self-titled debut EP of the same year turned heads online immediately; the group’s lush vintage rhythms and timeless pop hooks were even making waves on the BBC. They continued to release increasingly popular EPs and mixtapes between tours.

In 2014, TV Girl unveiled their first full-length, the critically acclaimed French Exit. The album keeps true to the TV Girl charm with a bevy of electronic samplings infused throughout light and airy guitars, whirring organs, and ethereal vocals. However, this record is not all summer nostalgia, and there are plenty of times where French Exit reads like disaffected fiction. The moody characters in these songs are fueled by revenge as often as love, underpinned by desperation and a deep yearning to connect.

Their 2016 follow up, Who Really Cares, finds the band doubling down on their heavy use of samples. Combining the aesthetic of 90’s hip hop with modern psychedelic pop, Who Really Cares offers a glimpse into the psyche of a love scorned twenty-something.”

TV Girl’s latest album, Death Of A Party Girl, sustains the dream pop, neo-psychedelic feel of previous work. Petering delivers prosaic storytelling in third-person narration, recounting tales of wistful, romantic flings and mini-dramas starring various shades of the archetypal manic pixie dream girl. The songs are echoing and surreal, cut with samples of dialogue from movies and radio shows that convey a grainy, vintage feel. Standouts include “King of Echo Park,” its beachy vibe conjuring images of skinny palm trees, graffitied skateparks, and humming lowriders; “7 Days Til Sunday”, a swaying, upbeat bop where the narrator reminisces of rooftop parties and one night stands in Manhattan; and the intoxicating “Every Stupid Actress”.”

Dallas-based indie pop artist Jordana creates an epic soundscape that pulsates with energy and world-class vocal delivery. With her latest album, ‘Lost + Found’, she is once again living up to the high standards she has set for herself. Drawing influence from alternative pop acts such as Broods, Chvrches and Grouplove, ‘Lost + Found’ is a clear departure from her 2014 debut self titled EP, Jordana.

Born and raised in Johannesburg, South Africa, Jordana left home at an early age to pursue her dream of becoming an American singer/songwriter. Settling in Dallas at the age of seventeen, she has performed throughout Texas before being featured in the national reality series The Next on the CW TV Network. Jordana has collaborated with producers such as Grammy-nominated Carmen Rizzo and is in high-demand as a studio session singer, her voice often being heard in stings for radio shows across the USA.

“While writing and singing this new album I felt that I was coming into my true self. I now feel lighter and full of freedom. I hope that anyone who hears it will feel the same and know that the only limits are the ones we put on ourselves.” ‘Lost + Found’ was produced by Geoff Rockwell and Aaron Kelley, and is now available on iTunes and Spotify.