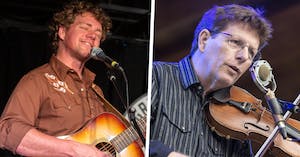 iCal
Google
Come be a part of the Travis Book Happy Hour featuring the legendary Tim O'Brien at The Grey Eagle on March 9 at 7pm!

Born in Wheeling, West Virginia on March 16, 1954, Grammy winning singer songwriter and multi instrumentalist Tim O’Brien grew up singing in church and in school, and after seeing Doc Watson on TV, became a lifelong devotee of old time and bluegrass music. Tim first toured nationally with Colorado bluegrass band Hot Rize, which formed in 1978. Kathy Mattea scored a country hit with his song “Walk The Way The Wind Blows” in 1986, and soon more artists like Nickel Creek and Garth Brooks covered his songs. Over the years, Tim has collaborated with his sister Mollie O’Brien, songwriter Darrell Scott, and noted old time musician Dirk Powell, as well as with Steve Earle, Bill Frisell, Mark Knopfler, Steve Martin, and Sturgill Simpson.

O’Brien says his most recent recording “He Walked On” is about “what you need to do to survive in America”. Covering work, racial issues, and modern technology, its eight originals and five covers offer an expansive portrayal of the nation from its beginnings to the present day, Personnel includes long time band mates Mike Bub (bass), Shad Cobb (fiddle) and Jan Fabricius (mandolin and vocal), along with drummer Pete Abbott, bassist Edgar Meyer, guitarist Bo Ramsey, and gospel singer Odessa Settles.

Other notable O’Brien recordings include the bluegrass Dylan covers of “Red On Blonde”, the Celtic-Appalachian fusion of “The Crossing”, and the Grammy winning folk of “Fiddler’s Green”. His 2017 release “Where the River Meets the Road” paid tribute to the music of his native West Virginia. O’Brien formed his own record label, Howdy Skies Records, in 1999, and launched the digital download label Short Order Sessions (SOS) with his partner Jan Fabricius in 2015.