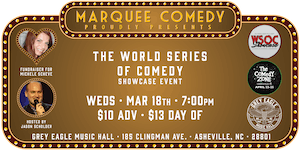 The World Series of Comedy

On Wednesday, March 18, Marquee Comedy is hosting a WORLD SERIES OF COMEDY (WSOC) Showcase event for comics who wish to pre-qualify for the Satellite contest at The Comedy Zone in Greenville, SC April 22 - 25.

Marquee Comedy WSOC Showcase participants will receive a video of their performance from The Grey Eagle Music Hall. The Winner will be chosen by the WSOC video judges.

The World Series of Comedy is the nation's leading job fair for comics. With contests taking place in numerous cities around the U.S., The WSOC facilitates networking and professional development for comics at all levels.

Partial proceeds to this event will help fund Michele Scheve's kidney transplant process, covering things like transportation, lodging, testing and non-insured costs for her potential donor and their support person. More details and ways to donate can be found here:

COMICS FROM AS FAR AS THEY'RE WILLING TO DRIVE!

Shows are 18+ and feature adult comics, talking about adult subjects, using adult language. We invite you to come with an open mind and a desire to laugh! If you are looking to be offended, we can arrange that, too. 🙂