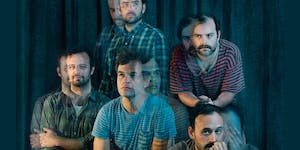 iCal
Google
The mewithoutYou Farewell Tour hits Asheville NC for a stop at The Grey Eagle on Monday June 13th! All ages show at 8pm, doors open at 7pm.

It is no mistake that mewithoutYou have become one of today’s most fascinating experimental rock acts. The last 15 years have borne witness to the Philadelphia five-piece exercising stylistic evolutions and aerial dynamics with humbling dexterity and untamed ambition. At their roots may be a theatrical progressive punk/post-hardcore band, but they’ve never been content to remain comfortably within a familiar genre. Their continuous multi-directional movements have left them increasingly difficult to classify, the growth of their branches impossible to predict. The group’s sixth full-length album, Pale Horses, is the best evidence to date of their eclectic agility.

The one constant in mewithoutYou’s storied career has been lead singer Aaron Weiss’ ability to sketch ornate, thought-provoking narratives. Seamlessly weaving his signature holler amidst whispered storytelling and stream-of-consciousness outpourings, his latest offerings vacillate between the emotionally wracked, vibrantly symbolic, and ambiguously metaphysical. His meandering, technicolor vision of a world apocalyptic—populated with werewolves and vulturemen, shape-shifters and apparitions, android whales and an Idaho bride—combines the fantastic opulence of the group’s recent albums with the vulnerable personal confessions of their earliest work.

Longtime band-mates Mike Weiss, Rickie Mazzotta and Greg Jehanian continue to craft dramatic, nightmare soundscapes which lavishly complement their singer’s ecstatic hallucinations. The addition of Brandon Beaver (of Buried Beds, the Silver Ages) allows the group as a 5-piece to revisit its earlier intricate, layered fretwork, while adding new depths of vocal harmonies and ever-peculiar arrangements. Musically, the group hearkens boldly to the raw intensity of 2004’s Catch for Us the Foxes, while building on the rich imagery of 2006’s Brother, Sister. Epic in scope, Pale Horses is mewithoutYou at their best, breathing fresh life into the end times, gloriously terrifying and hauntingly iconic.

Their latest album also marks a new beginning for the band, as it’s their first to be released on Run for Cover Records. Teaming with the rising Boston independent label was the outgrowth of their partnership with Will Yip, whose masterful production transforms the band’s transcendental musings into a widescreen experience. Drums and bass lines quake with the faults of the earth, as an army of guitars and multi-instrumental nuances ring in the paranoia, mass hysteria and peaceful exaltation. The result is a stunning collage—fitfully disturbing, steadily bizarre, uniquely celebratory—undoubtedly the grandest musical adventure yet conceived within mewithoutYou’s expanding tapestry.

How much noise can two people make? ‘68 is the sound of simultaneous implosion and explosion, of destruction and creation unbound. These are songs that could almost fall apart at any moment, yet never do, devilishly dancing between life and death. It’s a primitive impulse delivered with postmodern purpose; a blacksmith’s resolve with an arsenal of electric distortion and raw nerve.

Josh Scogin kickstarted his small band with the big sound in 2013, naming the two-man outfit he modestly undersells as “a little rock, a little blues, a little hardcore” after his father’s old Camaro. And there’s a muscle car-sized rumble beneath the hood of what the Atlanta, Georgia native and his percussive partner-in-crime, Nikko Yamada, unleash with an array of guitar, bass, drums, keys, and pedals, careening between swinging barnburners, wild haymakers, and moody atmosphere.

Like a Delta Blues reimagining of Bleach-era Nirvana or the disgraced punkish cousin of The Black Keys, ’68 adheres to a single ethic: unbridled authenticity. There’s not a “plan” with ’68 so much as a ride, with the duo hanging on for dear life in the eye of the storm every bit as much as the audience. The obstacle is the goal. The journey is the destination. Inventive, disruptive, frantic; even when dipping into a bit of Otis Redding or James Brown style funk, ’68 sound urgent.

The ’68 roadshow has taken them from Moscow to Tel Aviv, across Europe and Australia and all-over North America, often splitting up 20-hour drives between the two guys. The passion, the hunger, the good humor, it all connects with diverse crowds. Deliciously stripped down and vibrant, ’68 excels in intimate environments, to be sure, but is no less unignorable on giant festival stages or on the road with Bring Me The Horizon, Stone Sour, Beartooth, Avatar, August Burns Red, The Amity Affliction, and Underoath, where they’ve earned new converts every day.

In Humor and Sadness, the first album by ’68, debuted at No. 1 on the Billboard New Artist Chart. Two Parts Viper followed in 2017. “[‘68] bring the noise in the most righteous ways, caring less about the scene they came up through, the bloodless drivel that passes as ‘indie’ and the boring earnestness currently permeating ‘punk,’” declared Alternative Press. “Two Parts Viper is the best record of the year. Throw a copy in my casket, because I’ll never be done listening to it.”

Grammy-winning producer Nick Raskulinecz (Foo Fighters, Rush, Alice In Chains) became a believer after just a few songs of a ’68 set. On GIVE ONE TAKE ONE, crafted with Raskulinecz in Nashville, the band’s high intensity bombast threatens but never swallows the underlying groove.

With the same spirit of scrappy “winging it” and punchy minimalism that powered the Flat Duo Jets and The Jon Spencer Blues Explosion, ’68 push forward the pure rock traditions of audacity and disruption. Scogin gives everything to the microphone, as if singing to redeem his soul. He wields his guitar and keys like weapons, pulverizing away any false pretenses. It’s about the riff and the kick. It’s immediate. It’s alive. And it’s fun. Sweaty catharsis, cutting missives, surrendered by ’68 as if the world depends on them. Because in ’68, less is more. Oh, so much more.