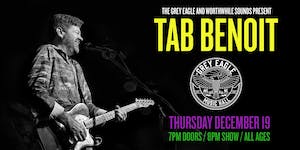 iCal
Google
Grammy nominated master of the Delta swamp blues, Tab Benoit, returns to The Grey Eagle in Asheville on December 19 for an all ages show.

Tab Benoit is a Grammy nominated singer, songwriter and guitarist who has built a remarkable 30+ year career on the foundation of his gritty and soulful Delta swamp blues and acquiring a devoted legion of fans along the way, as well as 5 Blues Music Awards, including BB King Entertainer of the Year (twice) and an induction into The Louisiana Music Hall of Fame. He has recorded and/or performed with Junior Wells, George Porter Jr, Dr. John, Willie Nelson, Big Chief Monk Boudreaux, Billy Joe Shaver, Maria Muldaur, James Cotton, Cyril Neville, Kenny Aronoff, Allen Toussaint, Kim Wilson, Jimmy Thackery, Charlie Musslewhite, Kenny Neal, Chris Layton, Ivan Neville, Jimmy Hall, Jim Lauderdale, Anders Osborne, and Alvin Youngblood Hart to name a few. Tab's accomplishments as a musician are matched only by his devotion to the environmental health of his native Louisiana wetlands. Benoit is the founder and driving force behind Voice of the Wetlands, an organization working to preserve the coastal waters of his home state. In 2010, he received the Governor's Award for Conservationist of the Year from the Louisiana Wildlife Federation. Benoit also starred in the iMax motion picture Hurricane on the Bayou, a documentary of Hurricane Katrina's effects and a call to protect and restore the wetlands.

In the decade since he burst upon the national scene by winning 1st place in the Blues Foundation’s 2009 International Blues Challenge in Memphis, TN with his band the Red Hots (and the prestigious Albert King Award as best guitarist), Arkansas native J.P. Soars has toured extensively through the United States, Canada, South America and Europe, and released an impressive catalog of powerful music. In addition to his work with his own Red Hots, Soars has been part of the regional all-star blues act Southern Hospitality, also featuring Tampa vocalist/guitarist Damon Fowler and 2019 Grammy nominee, Memphis vocalist/keyboardist Victor Wainwright, plus Red Hots drummer Chris Peet and Wainwright’s bassist Terrance Grayson. The Band’s 2013 Blind Pig release, “Easy Livin’” earned a Blues Blast Award for “Best New Artist Debut Release”, and they toured worldwide in-between the three bandleaders’ own schedules.

Soars was featured on an album by Jimmy Thackery and the Drivers, and has released six albums on his own and with the Red Hots, including 2018’s critically acclaimed SOUTHBOUND I-95 which just won him a Blues Blast Award for best Blues Rock Album. Brian Owens of Blues Music Magazine writes: “Make sure you have a fire extinguisher handy when you play Southbound I-95, cause J.P. Soars and his gang are on fire.” Steve Ovadia of American Blues Scene writes, “Soars’ voice and guitar are the glue that holds the album together. Both are the common thread through the various songs and both inject all of the tracks with a warmth and humanity. J.P. Soars is much more than just a gun-slinger.”

J.P. is psyched about his newest release, LET GO OF THE REINS, recorded during a whirlwind weeklong session at Tab Benoit’s Whiskey Bayou studios, with a band featuring Red Hot’s drummer Chris Peet on bass, and Benoit on drums, they recorded twelve songs in five days – eight originals which they wrote on the spot, plus four choice covers. The inspiration for the album came from the many nights they all spent jamming into the wee hours on the Legendary Rhythm and Blues Cruise and at the Big Blues Bender, and as expected, they captured many magical musical moments on this record. LET GO OF THE REINS debuted at number seven on Billboard’s Blues Chart of the top selling blues albums in the country.