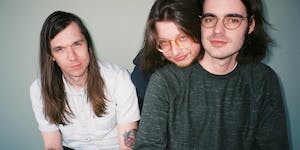 Can't make it to the show!? The Grey Eagle and our streaming partners Mandolin have you covered! Plus, your live streaming ticket gets you unlimited on-demand replay for 72 hours after the broadcast ends! ** CLICK HERE TO WATCH THE LIVE STREAM VIA MANDOLIN **

At the Moonbase, the fourth full-length album from Slaughter Beach, Dog, is a return to form for Philadelphia bandleader Jake Ewald. Written and recorded alone at home and at The Metal Shop, Ewald’s East Kensington recording studio, the album tracks an exercise in solitary production not unlike Slaughter Beach, Dog’s 2016 debut Welcome or 2017’s Motorcycle.JPG. On the heels of 2019’s Safe and Also No Fear, Ewald’s latest offering brings expanded arrangements and sharpened storytelling as he conjures salad days over slacker rock (“Do You Understand”), dark grooves of seedy city life (“Song for Oscars”), and even a barroom-piano-driven “escapade through the great American bedroom” (“A Modern Lay”). At the Moonbase arrives December 24th on Lame-O Records.

What if the worries that keep you awake at night—fear of commitment, awareness of mortality, the inevitability of loss—could, instead, motivate you during the day? That is the gist of Trace Mountains’ Lost in the Country, a brisk indie rock record that bluntly addresses our deepest concerns and transmutes them into 10 winning anthems about persevering. In the worldview of Dave Benton, the Trace Mountains singer-songwriter who gathered a studio band to shape these songs, the cure is sometimes as simple as a long walk in the woods or a solitary cry in a foreign rock club. Or maybe it’s recognizing, as he does here more than once, that funneling your sadness into a tune just to make it through another day is perfectly acceptable. Lost in the Country responds to novel modern afflictions—the inadequacy that stems from witnessing everyone else’s glamour on social media, or the generational unease of a forsaken future—with Benton’s own survival guide, as comforting for its candor as it is accessible for its instant hooks.

Benton is an acolyte of big-guitar indie rock, particularly records that counter the self-doubt and systemic confusion of early adulthood with the bliss of getting loud in a room with your pals. His sacred texts start somewhere around Dinosaur Jr.’s 1987 landmark You’re Living All Over Me, include Built to Spill’s 1994 opus There’s Nothing Wrong With Love, and run up to the War on Drugs’ 2014 breakthrough Lost in the Dream (cannily namechecked by this album’s very title). His devotion has been clear for nearly a decade, first on the hulking albums he made with the promising but departed LVL UP, and on his own as Trace Mountains. His lo-fi debut supplied pure Bright Eyes and Sebadoh pastiche. When he kicked on the amps for 2018’s A Partner to Lean On as LVL UP wound down, he seemed adrift, sad and searching for his own sound.

Musically and emotionally, Lost in the Country is a decisive step forward. Those familiar references still abound—the title track might have fit on a turn-of-the-millennium Barsuk compilation, wedged somewhere between Death Cab and John Vanderslice, while the assured solo that ends “Rock & Roll” seems salvaged from A Deeper Understanding’s scrap heap. Benton name-checks that War on Drugs album on the title track, too, reinforcing his devotion to the romantic sweep of epic rock’n’roll, recast for the budgetary constraints of someone who recently quit his bigger band. There’s a newfound poise to these songs, an effortlessness in both conception and delivery that suggests Benton’s music can mirror his heroes while capturing his own experiences, too. Even when he gilds “Cooper’s Dream” with singing saw and glockenspiel or “I Am Leaving You” with blaring surges of bright organ lines, he turns his old loves into your new sing-alongs.

That brightness lifts Benton through the darkest parts of these songs. On “Me & May” he considers the implications of a breakup, pondering the parallel universe where he’s still happy and satisfied. Benton acknowledges the regret of choosing one timeline instead of another, but incandescent harmonies and spring-loaded drums guide him to the realization that he did the best he could with what he knew—all any of us can do, he suggests, until we are “drifting into a dream.” Again contemplating the choices we’re forced to make during “Dog Country,” he reflects on leaving Brooklyn for the woods of the Hudson Valley, pondering what he might have lost or gained. Pedal steel and a bucolic shuffle comfort him like hands on his shoulders, tempering FOMO’s bittersweet sting. - Pitchfork review, by Grayson Haver Currin