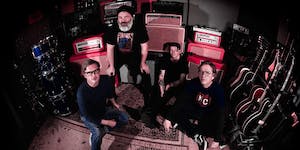 iCal
Google
SHINER and Spotlights visit Asheville NC for a stop at The Grey Eagle on March 7. It's an ALL AGES ROCK SHOW at 8pm and doors open at 7pm.

Shiner formed in 1992 and soon found themselves signed to DeSoto Records, (owned by Jawbox’s Kim Coletta and Bill Barbot). The band began a creative high and a busy touring schedule that endured for years, with their final album in 2001 The Egg a critical success. Pitchfork said, “Shiner’s six-string bloodletting beats the crap out of anything you’ll hear on commercial FM these days” and All Music noted, “The songs themselves bask in an epic splendor, replete with the kind of arrangements that reward repeat listenings” Along the way countless tours of the US, Europe and Japan, and 4 full-length albums gave them a fiercely loyal set of diehards. Comparisons with their contemporaries of HUM, Jawbox, Failure, and Swervedriver were unavoidable, but Shiner carved a path of their own with a dedication to song-craft and musicianship wrapped in darkly sugared hooks.

Shiner broke up in 2002 but 10-years later re-released The Egg on vinyl and played sold-out shows in New York, LA, KC and Chicago. Those were some of their biggest shows ever and many in the audience were new to the Shiner fanclub. In 2018 the 4 of them – drummer Jason Gerken, bass player Paul Malinowski and guitarists Allen Epley and Josh Newton decided they were not quite finished, there was another life for Shiner they could not ignore.

After a few recording sessions that took place over a year and a half, the band have emerged with 8 solid songs that make up Schadenfreude. The LP was self-produced, engineered, and mixed at Malinowski’ own Massive Sound studio in Shawnee, KS. “We’ve always been extremely hands-on, even when working with someone else technically ‘producing,’” says Newton, “with The Egg we ended up remixing and adding things to almost half the record on our own. At this stage in our existence, we know what we should sound like.”

Despite the hiatus, Shiner have not missed a beat Gerken is still a drummer’s drummer and his heavy right foot is tied to Malinowski’s distorted-symphony bass. Epley and Newton hew left and right in the mix and worked in lockstep counterpoint throughout the proceedings and leave room for the vocals to enter the mix without overtaking, and instead working as a whole within the strings and skins.

The songs on Schadenfreude are not so much an answer to The Egg as some properly timed follow up might, but instead stand on their own. It’s the sound of a 4 piece band with each player finding his place in a book as though he just left the room an hour earlier and picked up on the next paragraph upon return. Epley says, “a lot of themes on the album are pretty dark but always with a silver lining around the edges. The title itself is a commentary on the most common human trait of enjoying your rivals’ demise. Or your apparent enemies.”

It happens void of spectacle, show, or tableau. However, in this day and age, that might be why the story of Spotlights feels so serendipitous and strange, if not utterly surprising. This story also instantly appealed to some rather influential peers who lent an early endorsement. Two musicians—husband-and-wife duo Mario [guitar, synths, vocals] and Sarah Quintero [bass, guitar, vocals]—simply pick up their instruments and mainline dense distortion, spacey soundscapes, and unnervingly serene vocal transmissions directly from the heart.

This unpredictable, yet unassuming sound quietly heralded their arrival in 2016 on the D.I.Y. debut LP, Tidals. Brooklyn Vegan stumbled upon the project and streamed “Walls.” The song eventually entranced musician and producer Aaron Harris (ISIS/Palms) who shared it with his Palms singer and Deftones frontman Chino Moreno. An invite to open the Deftones summer tour followed as the band would go on to share the stage with everyone from Melvins, Quicksand, Hum, and Glassjaw to Pelican and Pallbearer. Ipecac Recordings co-founders Mike Patton and Greg Werckman fell under the band’s spell and signed them. The Harris-produced Seismicdropped on Ipecac Recordings in 2017 to acclaim from Revolver, Metal Injection, New Noise, MetalSucks, and many others. Between tours, 2018 saw them reveal the Hanging By Faith remix EP and one-off single “Kiss the Ring” [feat. Allen Epley].

Mario may be able to explain how it all happened, but the “why” still eludes him…

“Three years ago, we were just playing tiny local shows, and all of these crazy things have happened since,” he smiles. “It’s an interesting story to us, because we’ve never had a gimmick or a hook. What sets us apart is the music. We try to bring different worlds together in a way that’s as original as possible. We know the specifics of how it happened, but we don’t really know why.”

The group’s 2019 third full-length, Love and Decay, may indirectly offer an answer. This time around, Spotlights once again personally handled production, working out of a tiny Brooklyn rehearsal space. However, for the first time, they enlisted the talents of drummer Chris Enriquez behind the kit on the entire body of work rather than a combination of Mario and guest performers.

Sonically, the group further canvased new territory. Whether it be the hummable guitar lead peeking through trudging grooves on “Until The Bleeding Stops” or the ghostly pop chorus of “Particle Noise,” they ascend to a tipping point between volumetric riffing and blissful melodies. “Xerox” bears a sense of delicate intimacy within the delivery. Meanwhile, the first single “The Age of Decay” crescendos towards an emotionally charged harmony colored by shimmering keys and bright guitars before off-kilter riffs seesaw back-and-forth on the bridge.

“‘The Age of Decay’ encapsulates everything we do on this record,” continues Mario. “It’s got some of the heaviest moments as well as the most dynamic and melodic. It shows little bits of what we get into throughout the whole album in one track. It’s a love story in this age of decay. There are some personal points connected to our relationship about how things grew from when we met. We moved around the country and chased this thing together we’ve been chasing our whole lives. Meanwhile, it’s also about being in a world that can be fucking hard to deal with. It’s a broad stroke. It’s not just a picture of darkness and decay, but love.”

In the end, Spotlights paint such a picture on their own terms and without template or form.

“It’s intangible,” Mario leaves off. “It’s intense. It’s beautiful. There’s an impending darkness underneath everything and a sense of unease, but it’s also honest and vulnerable. It’s just really important to us. Regardless of why anyone might react, that’s why we do it.”

Shun are a four-piece founded by Matt Whitehead (guitar/vocals), Scott Brandon (guitar/backing vocals), Jeff Baucom (bass) and Rob Elzey (drums), who recorded the nine tracks of their self-titled debut in isolation prior to turning them over to the esteemed J. Robbins at the Magpie Cage (Clutch, The Sword, so many others) for mixing and Dan Coutant at Sun Room Audio for mastering.

Astute Small Stone Records loyalists will recognize Whitehead from his work in Throttlerod. He’s not alone in pedigree. Brandon has spent most of his life as a working musician, producer and DJ in Detroit, Ann Arbor, MI, and Chicago. Baucom, a veteran player in his own right, played together briefly with Whitehead in a band called Made of Machines and has been a part of the regional music scene for some time. And Elzey has toured the world as a tech for the likes of Hatebreed and Unearth, among many others.

With this varied experience behind them, Shun work quickly to establish a distinct identity throughout this first LP, incorporating styles from melodic noise rock and heavy riffs to atmospheric largesse and contemplative, patient construction.

Having recorded in covid-isolation means drums and bass captured in Elzey’s garage and Brandon’s guitars recorded in his basement studio. Whitehead’s guitar was recorded with amps tucked into his bedroom closet and vocals also tracked in his house. A guest spot from Lamb of God’s Mark Morton on the penultimate “Heese” required no studio stop-by. But it also means songs put together over a period of months rather than days.

It’s to the band’s credit that Shun exists at all, let alone that it is neither disjointed nor wanting for urgency. A forceful and intermittently aggressive offering, it balances mood and intensity of expression throughout its songs. And while the record is coming out at a time when the band can’t get out and support it on stage as they otherwise might, the fact that they are pushing ahead with the release speaks as well to the need to say what they’re saying.

Shun’s style manages to be thoughtful and even sometimes proggy without giving in to self-indulgence or pretense, and their debut offers high-grade, dynamic, melodic heavy rock that resounds with purpose, taking familiar elements and pushing them beyond simplistic genre confines.