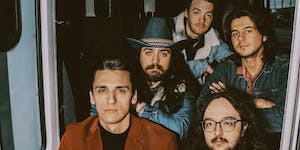 Can't make it to the show!? The Grey Eagle and our streaming partners Mandolin have you covered! Plus, your live streaming ticket gets you unlimited on-demand replay for 72 hours after the broadcast ends! ** CLICK HERE TO WATCH THE LIVE STREAM VIA MANDOLIN **

5 years on the road, Red Clay Strays are the hardest working band in the industry. True hell-bent road warriors with old souls, these men of music have it in their bones to give the world the best music and experience it has ever had. Based out of Mobile, AL, the band tours the country non-stop. The band released their debut single, "Good Godly Woman", in 2019 and followed it with "No Way To Know" in 2020. After 5 years in the making their debut album, "Moment of Truth" is set to be release in April of 2022. Saddle up folks! You are in for a hell of a ride with Red Clay Strays.

Armed with a flat top or backed by a full band, Justin Clyde Williams takes listeners on an emotional journey with his songs and stories you can relate to no matter where you call home.

Capturing the full spectrum of life, the good times and the bad, most of his songs you’ll hear serve as a soundtrack to his own experiences with love, death, heartache and that one time he “ate just a little bit too much of that gummy bear”

Raised on the sounds of traditional country and bluegrass music with a variety of influences, when he’s not performing himself, its not uncommon to see Clyde playing side man for one of his buddies or appearing with Tyler Hatley in the Dick and Tammy show.

Justin Clyde Williams always leaves people wanting more with an unwavering experience that is blunt, therapeutic, candid and above all - unforgettable.