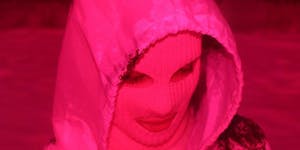 NOTE FROM THE BAND: "With growing concern over the spread of coronavirus, as well as event bans restricting capacities on public gatherings, the Pussy Riot team has decided to postpone the North American tour. We will be working to reschedule this date soon."

Pussy Riot is Russian Moscow-based activist art collective known for its provocative and radiant live music performances and actions that they keep doing since 2011 despite all the dangers coming from the harsh Putin's regime.

In 2012 three members of Pussy Riot were arrested for performing a punk-prayer "Virgin Mary, please get rid of Putin" and convicted for two years in labor camps. Other known Pussy Riot's music and performance pieces include "Putin has pissed himself", "Death to prisons, freedom to protest!", "Police state", "Straight outta vagina", "Make America great again", "Refugees in" (a performance in Banksy's Dismaland). In 2018 four members of Pussy Riot made international headlines by running onto a football field during the World Cup final demanding to release all political prisoners.

Pussy Riot's live performance piece is led by Nadya Tolokonnikova, who served two years in jail, went through hunger strike protesting savage prison conditions and ended up being sent far away to Siberian penal colony, where she managed though to maintain her artistic activity and with her prison punk band she made a tour around Siberian labor camps. Nadya Tolokonnikova recently published a book "Read and riot: Pussy Riot's guide to activism", well-received by critics.

Pussy Riot performance on stage is a radical audio-visual live act touching topics like gender identity, personal freedom, climate change, transgression and how activism can help us to shape the better world.

** Pussy Riot has partnered with PLUS1 so that $1 from every ticket sold will go to support Planned Parenthood and their local affiliates on each tour stop delivering vital reproductive health care, sex education, and information to women, men, and young people in the US. **

There is a truism that the best revenge is a life well-lived, and maybe that works eventually, but before that there is another necessary step—a violence, a purge. Deli Girls’ second record with New York-based Sweat Equity, I Don’t Know How to Be Happy, is a vengeance document built on industrial mutant rage. Their rogues’ gallery, named without deflection, includes cops, hypocrites, fascists, and apologists. This alone is not unusual—in 2019 we know who our enemies are. The truly celebratory part is how it all unfolds.

Deli Girls is only two people—Danny Orlowski on vocals and Tommi Kelly on machines, but on record they are legion. In “I’d Rather Die,” Kelly layers on cyber-noir synths then drops in distorted-to-oblivion beats that crunch like combat boots on broken glass. Orlowski’s shredded vocals and weaponized hysterics come in from all points of the mix. The Deli Girls world has always been a claustrophobic one, but where their 2017 record Evidence was played through in one or two takes like a live show, Happy is more intentionally constructed, with dense overdubs that make it all the more immersive.

For the most part, these are dance tracks. When performed live, they often stir up revelatory mosh pits in which Orlowski thrashes. Brooklyn punk shows aren’t known for their dancing, but in a devoted underground populated by artists such as Dreamcrusher, Machine Girl, Show Me the Body, and SIGNAL, bodies still collide. In the crucial queer text and AIDS memoir Close to the Knives, honored last year in a Whitney retrospective, David Wojnarowicz raged against the expectation of civility in the face of constant state-sanctioned violence, and attending a noise-punk show in Brooklyn at the moment can feel like a collective exorcism, an opportunity to discharge some of this ubiquitous anxiety. The legion, after all, exists. And in the “Hey Mickey”-meets-“Bank Head” claps on the intro to “Abortion,” or the off-kilter pulse anchoring the kinetic “Officer,” or the pinball timpani on “Peg,” there is an implicit invite to join up. - Pitchfork review