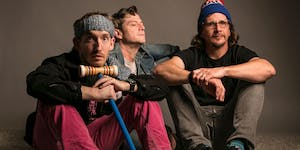 iCal
Google
John Kirby & The New Seniors return to The Grey Eagle's patio stage on FRI June 3rdst at 6pm! It's an ALL AGES show, doors open at 5pm.

John Kirby and the New Seniors were born from fire under a full moon in the winter of 2019. Bonding over a mutual love of Van Halen and The Replacements, the three instantly connected and vowed their allegiance to rock and roll in both form and spirit. "We get to the chorus quick.. while also sticking it to the man...".

Fueled by the guitar playing, singing and songwriting of John Kirby and anchored by the rhythm section of old school rockers John Hawkins (drums/vocals) and Chad Nance (bass/vocals), John Kirby and The New Seniors play guitar driven original rock with a little bit of power pop sprinkled on top.

Their music has also been described as "Punk/metal with a bouquet of guitar based pop", "A cross between Westerberg and Petty" and "Nicely crafted power punk".

Always looking to forge ahead, the band released their first EP "Don't Kill the Magic" in September of 2019 and have followed that up with 9 singles and 1 live album release. The band will release their first full length album in early spring. JKandTNS also continues to be involved in the Black Mountain based Holy Crap Records music community.