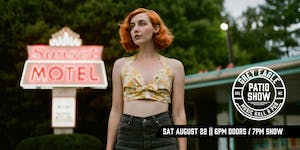 It was 3AM one Southern California morning back in 2011 when Ryan Schilling first heard the captivating voice of Christy Lynn singing. The two felt an instantaneous creative spark and joined forces together in a band, and haven’t looked back since. Together, Christy Lynn and Ryan are a powerful musical combination, simply making music under the Christy Lynn Band moniker. They share a deep interest in music all across the spectrum, from classic languid country and folk tunes to driving rock & roll. They’ve taken those influences and distilled them into their own unique sound that seamlessly fuses country music with a dash of rock and soul. The Christy Lynn Band is set to release their first full-length album, Sweetheart of the Radio, on vinyl and CD, along with a proper digital release all streaming platforms on March 12, 2020.

Their compelling frontwoman Christy Lynn possesses a singular, powerhouse voice and a knack for capturing the clever, kitschy lyrics of old country music. Ryan’s exquisite talents lie in his groovy guitar playing and his adept technical skill at capturing the rich texture of their music, all using analog recording equipment. In fact, the recording studio they used to record their first full-length album is actually built into the back of a 1987 Ford Econoline truck called the American Sound Truck that Schilling built out and customized himself, utilizing a melange of vintage recording gear that he’s sought and acquired over the years.

Christy Lynn hails from the small town mountain of Anza in southern California. She grew up singing country music in the back of her dad’s truck during the 45-minute drive down the hill to the local grocery store. “It was really quiet and I had a lot of time, so I spent most of my childhood locked in my room singing to myself.” Over the nine years they’ve been making music together, Christy Lynn and Ryan have trekked across the country for months at a time, playing countless stages on multiple tours while living out of their dusty van or other, assorted vintage vehicles.

In the midst of their wayward travels, the duo found their way to Asheville in 2013, after packing their belongings and starting out on a one-way, cross-country road trip with no clear destination in mind. They left behind Southern California and landed in Asheville, an idyllic location with a rich musical history that’s nestled in the Blue Ridge Mountains of Western North Carolina. “Singing and writing songs are the only things that shine above all other things,” Christy Lynn says. “They are the only things I truly love to do.”

In Asheville, the duo added a handful of other musicians to round out The Christy Lynn Band. So far, they’ve played the main stages at the All Go West Festival and the LAAF Festival, as well as the beloved, sold-out Asheville Opry show. Along with the American Sound Truck, the two also opened up Asheville Vinyl Co., a boutique hand-cut vinyl production company specializing in small-run, limited edition records.

Sweetheart of the Radio features Christy Lynn’s unparalleled vocals, with Ryan Schilling on guitar, Kenan Hopkins on fiddle, Nate Pusateri on drums, Zack Page on bass and Jackson Dulaney on pedal steel. The rootsy 12-song record was recorded and produced in the American Sound Truck by Schilling, and tells the fictional story of a radio darling who is beloved far and wide, a skyrocketing success masking a deep sadness. It’s an unsatisfying one-way relationship: the whole world loves her, and yet not one person truly does because they do not truly know her. The crux is that perhaps she doesn’t truly know herself. It’s a soulful country album that harkens back to the sound of its glory days and is sure to appeal to fans of true country and Americana, while simultaneously infusing it with a modern sound that’s distinctly their own.

Sweetheart of the Radio is a surprising, heart-wrenching lyrical and musical journey with a hearty dose of catchy refrains and campy, throwback country charm. The skillful production crisply brings out each howl and crackle in Christy Lynn’s voice, and spotlights her impressive range and cinematic verses within the lyrics. This is also the first music they’ve written together where Lynn wrote the lyrics and melodies for every song, eventually bringing those ideas to Schilling who wrote the accompanying guitar parts to match the vibe of each respective tune.

Sweetheart of the Radio will be out on April 3rd 2020. The album was recorded and produced by Schilling in the American Sound Truck. It was mixed by Julian Dreyer (Steve Martin, Steep Canyon Rangers, The Avett Brothers) at Asheville’s famed Echo Mountain Studios, and mastered by Dave Harris.