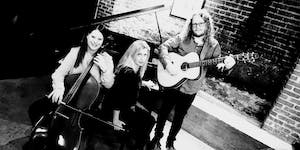 iCal
Google
Carrie Morrison returns to The Grey Eagle's outdoor patio stage with her Neverwhere Trio on THU June 16th at 5pm! It's an ALL AGES show.

CARRIE MORRISON AND THE NEVERWHERE TRIO

Carrie Morrison's music will break your heart - in the best way. Melodic and memorable, her songs make connections. The singer/songwriter/pianist, a native of Louisville, Ky., has been playing piano since age seven. She moved to WNC in 2004, and has been a popular act in the area for more than 15 years. Morrison is known for melodically strong songs with personal, pithy, lyrics, ranging from the deeply emotional to the slightly silly. Her EP "Carolina Blonde" was released in 2013 and produced by the late Terry Wetton. Album "Miles and Miles" was produced by Chris Rosser, of award-winning ensemble Free Planet Radio, released in 2017. Her latest project, EP "The Neverwhere Sisters," produced by Andrew Thelston and Daniel Nisbet, featuring cellist JamieLeighBennett, was released summer 2021. Morrison has had airplay on WTZQ and WNCW, and enjoys collaborations with several local artists onstage and in studio. Morrison is a teacher of Exceptional Children at Brevard High School. She is married to Mike, the love of her life, her champion, and best roadie.

Andrew Thelston is known for his unique blend of guitar-heavy rock, big grooves, soaring vocals, and passionate live performances. For the past two years, his power trio has been mesmerizing crowds throughout the Southeast with his brand of high energy rock-n-roll. In 2019, Andrew's music was featured on the hit Netflix show "Lucifer." In addition to songwriter and performer, Andrew is a producer for Ginger Bird Studios. His songs and videos are streaming worldwide.

Jamie Leigh Bennett is a cellist and flutist living in Hendersonville, NC. A native of NJ, Jamie Leigh has also lived in CT, WV, GA, UT, NV, and moved to WNC in July of 2014. She received her Bachelor’s in Music Therapy from the University of Georgia and her Master’s in Flute Performance from the University of Nevada, Las Vegas. Upon moving to WNC, Jamie Leigh began performing with Hope Griffin and can be heard on cello and flute on Griffin’s albums, "Where the Soil and the Stars Meet" and "And the Lights Will Shine." She has also recorded with other artists in the area, including Andrew Thelston and Debbie Jackson.

Jamie Leigh performs with Carrie Morrison in the duo The Neverwhere Sisters. The unique combination of piano, cello, flute, and vocals really captures an audience. Jamie Leigh enjoys traveling locally and around the country in pursuit of her music career. She also teaches flute, oboe, clarinet, saxophone and cello at the WNC Music Academy and out of a private studio at her house. She will be starting a MusicTogether program for children ages 8 weeks-5 years at the Academy in June 2021 and will be heading up a new instrument rental program through NEMC. Jamie Leigh lives in Hendersonville with her husband Rob, sons Kyllian and Ronen, two dogs and two cats.