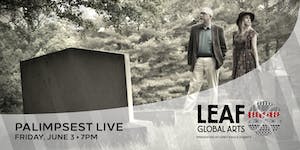 Palimpsest is a (mostly) single-voiced audio drama about memory, identity, and the things that haunt us. Each ten-episode season is a unique and self-contained story, exploring the spaces between horror, fantasy, and psychological realism.

“Palimpsest is perfect for those who like their horror with a little Shirley Jackson vibe.” --Tor.com

“Palimpsest is a masterclass in atmosphere. I absolutely cried.” -- Elena Fernández-Collins, AudioDramatic

“Palimpsest [...] manages to create a slow burn of dread and sorrow over its episodes. This is largely due to the tightly wrought storyline and Hayley Heninger's magnificent performance. A wonderful take on the classic ghost story genre." -- Paul Bae, The Black Tapes, The Big Loop

“A spooky and melancholic and ultimately devastating tale, beautifully written.” -- Jacquelyn Landgraf, It Makes a Sound

The first season, Anneliese, tells the story of Anneliese Glaser, who is still mourning the death, years earlier, of her sister Claire. The podcast is presented as Anneliese’s audio notes to her former therapist as she works through her feelings about her sister, but soon takes an eerie turn to document hauntings in her new apartment, as well as Anneliese's potentially flawed memories of Claire. The season ran bi-weekly from October 31st, 2017 until March 6th, 2018.

Season Two follows Ellen, who is running from her family's criminal activities and finds herself working in a very unique freak show. Set in the 19th century and centering on a queer faerie love story, the second season incorporates season one’s themes into a different but equally unsettling tale. Season two ran from September 4th, 2018 until January 15th, 2019.

Season Three (Josie) ran Jan 4th-Sept. 1st, 2020, and follows Josie, a disgraced American codebreaker living in London during the Blitz, who begins seeing and interacting with what appear to be the spirits of the London dead. She quickly realizes the bombs may have released something much older and more ominous. Government conspiracies, Lovecraftian cults, and Lon Chaney’s The Wolf Man all figure in this expansive folk horror tale.

Season Four (Ash) began April 13th, 2021, and follows a construction company hired to renovate the Hawthorne House, an abandoned but not necessarily empty house with sinister ties to the lead contractor’s grandfather.

All seasons are available (and bingeable!) on all podcast platforms. Subscribe on Apple Podcasts, Stitcher, GooglePlay, Podchaser, or whatever podcatcher you prefer. You can also stream episodes on Spotify.