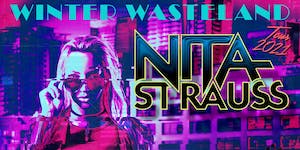 Los Angeles born guitarist Nita Strauss has become a force to be reckoned with in the music world, dazzling audiences across the US, UK, Europe, South America, Asia, Australia and Africa. Most fans will recognize Nita as Alice Cooper’s touring guitarist of the past 5 years, but she has also played with R&B star Jermaine Jackson, early MTV darlings Femme Fatale, video game supergroup Critical Hit and popular tribute band The Iron Maidens. Her skill, xuberant stage presence and love for all things about her instrument have earned her a stellar reputation in the music industry and endorsements including Ibanez Guitars, Marshall Amplification, DiMarzio pickups, Monster Energy and more.

In January of 2018 Nita was officially announced as the first ever female Ibanez signature artist with her own model guitar, the Ibanez JIVA10. She also released her signature pickups, the DiMarzio Pandemonium. April saw Nita playing WWE Superstar Shinsuke Nakamura’s entrance music at Wrestlemania in New Orleans in front of an audience of 78,000 fans and millions streaming worldwide, and in the same month she launched a wildly successful Kickstarter campaign for her debut solo record Controlled Chaos. The campaign reached its goal in two hours, doubled it by the end of the day, tripled the following day and ended up over 800% funded. Nita produced the record herself and did the majority of the engineering, as well as playing all the guitars and bass on the record.

After the record was completed, Nita signed with Sumerian Records to release and distribute the album worldwide. The first single “Our Most Desperate Hour” was released in September of 2018 along with. pre orders for the record on both CD and vinyl, with the vinyl completely selling out before even bring release. Her record CONTROLLED CHAOS made a huge debut on the Billboard charts at #1 Top New Artist, #3 Label Independent, $4 Top Hard Music, #8 Top Rock, #8 Top Internet, #20 Top albums, and #7 on the iTunes Rock chart. The album’s second single, “Mariana Trench” was chosen by WWE as an official theme for NXT Takeover: War Games. Nita immediately followed the release with a successful co-headline tour with modern guitar virtuoso Angel Vivaldi.

Nita has been featured on the covers of worldwide print magazines including Guitar World and Guitar Player, and on dozens of albums, trailers, and soundtracks, including Heroes Of The Storm (Blizzard) and Grammy-nominated Metal Gear Rising: Revengeance (Konami/ Platinum G)

Nita has been featured on the covers of many worldwide print magazines and on dozens of albums, trailers, and soundtracks, including Heroes Of The Storm (Blizzard) and Grammy-nominated Metal Gear Rising: Revengeance (Konami/ Platinum Games); and is the author of the Guitar World column “Like A Hurricane”. Nita was also the official in-house guitarist for the LA KISS, the arena football team owned by Paul Stanley and Gene Simmons of KISS. She is one of the most sought after clinicians in the industry and has done extensive clinic tours across multiple continents. Her consistent touring schedule has shown her to play in front of over a million audience members per year consistently for the past several years. Nita is also extremely passionate about health and fitness, and uses her wide social media reach to inspire and educate people about maintaining a healthy lifestyle while traveling on tour.

Black Satellite is a rock duo from NYC comprised of Larissa Vale and Kyle Hawken. Having been writing music together for several years, Black Satellite is the culmination of a deep-rooted partnership contributing to their unified writing style.

Shortly after launching their first single Valkyrie from their full-length album Endless, Black Satellite was requested as support for Starset at NYC’s Gramercy Theatre on the strength of their debut. Their follow up single Blind premiered on ibobi Radio and was subsequently featured on Alternative Press via their discover playlist. Black Satellite was also named one of Alternative Press’ “12 Bands You Need To Know” in a print issue of the magazine.

Billboard describes the album as "the end point one might arrive at after listening to all of Muse’s catalog and deciding they just weren’t epic enough."

Endless paints an almost cinematic landscape, with every song progressing into the next revealing a new facet of the duo’s style and complexity. This lends itself to a well-crafted tonal arc that is sure to satisfy.

The band recently concluded writing and recording their sophomore record, Aftermath, mixed by veteran producer Ben Grosse (Marilyn Manson, Breaking Benjamin, Filter). Release date to be announced. Their new single Void is the first taste of the brand new album. Knotfest commenting on the track: “the first single offers a glimpse into the bold, stylishly dark sound that has made the duo of Larissa Vale and Kyle Hawken such a promising prospect.”

Abby K is a bassist, vocalist, and songwriter from Charlotte, North Carolina. She picked up the bass at age 13 after being influenced by Gene Simmons at a KISS Concert. Months into her musical journey, she was 1 of 3 bassists in the United States selected to attend GRAMMY Camp in Los Angeles, CA. She claims that her proudest moment was when Nita Strauss joined her onstage to perform Iron Maiden’s “The Trooper”. Since then, she has developed her own style of musicianship which is commonly described as the love child of Steve Harris (Iron Maiden) and Lita Ford.

In the spring of 2021, Abby K became an independent artist and announced that Diego Vargas and Zach Gulledge will be joining the band as lead guitarist and drummer. Recently, the new lineup released “Because Of You” and embarked on their first major tour with Nita Strauss which ended at the legendary 'Whisky A Go Go'. Join Abby and the band on this incredible journey of theirs by following @abbykrocks on all social media.