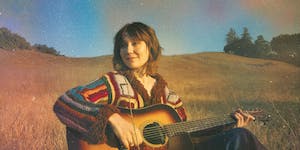 iCal
Google
Molly Tuttle returns to The Grey Eagle in Asheville NC to celebrate the release of her brand new album on March 11 at 9pm.

An award-winning guitarist and songwriter, native Californian Molly Tuttle continues to push her songwriting in new directions and transcend musical boundaries. Since moving to Nashville in 2015, she has worked with many of her peers and heroes in the Americana, folk, and bluegrass communities, winning Instrumentalist of the Year at the 2018 Americana Music Awards. Tuttle’s 2019 debut album, When You’re Ready, received critical acclaim, with NPR Music praising its “handsomely crafted melodies that gently insinuate themselves into the memory,” and the Wall Street Journal lauding Tuttle’s “genre-boundary-crossing comfort and emotional preparedness,” calling the record an “invigorating, mature and attention-grabbing first album.”

Tuttle’s accolades also include Folk Alliance International’s honor for Song of the Year for “You Didn’t Call My Name,” from her 2017 Rise EP, and consecutive trophies for the International Bluegrass Music Association’s Guitar Player of the Year; she was the first woman in the history of the IBMA to win that honor.

During the pandemic, Tuttle recorded a covers album, …but i’d rather be with you, which was released in August 2020. The record, which features guest vocals from Dawes’ Taylor Goldsmith and Old Crow Medicine Show’s Ketch Secor, includes songs by musicians ranging from FKA Twigs to Cat Stevens, Rancid to Karen Dalton, and The National to The Rolling Stones. The New Yorker’s Jay Ruttenberg, in praising her rendition of the Stones’ “She’s a Rainbow,” says: “In Tuttle’s reading, the song uses a bluegrass spirit to look to the past—and a feminist allegiance to peek at the future.”

Casey Noel’s timeless, captivating music will remind you of the many ways songs can enrich a life. A skilled singer-songwriter crystallizes the grace of a moment, honors and beautifies sadness, gives wings to something tender, something fun – something longing for flight. Casey’s work, gathered for the first time on her Americana-tinged debut release Not Just Pretty Words, does all of the above and more.

24-year-old Casey has been on an artist’s path most of her life, though this hasn’t always been apparent. The initial spark was an act of generosity from someone who recognized promise in a very young Casey: her Costa Rican grandfather, who gifted his 5-year-old granddaughter with a Spanish guitar. Although lessons in classical technique followed, honing Casey’s fingerpicking skills for what was to come, the budding guitarist’s primary passion from age 8 to 17 was actually competitive ballroom dancing. “But then I realized I lived in North Carolina,” she says. “And no guys here dance. So I started focusing on playing guitar.”

Soon after Casey switched from classical to steel string acoustic – a game changing turn of events – her mother, Olga, insisted she sing for her guitar teacher, Kevin Dollar. A seasoned music professional, Dollar would prove to be another generous, pivotal figure. Not only was he impressed with his longtime student’s voice, he saw something more beneath the surface. Dollar encouraged 17-year-old Casey to try songwriting, which had not occurred to her. “I didn’t know anything about the business,” Casey says. “I didn’t know about shows other than arena shows, or even the concept of a singer-songwriter. It took me a while to have confidence in myself to write songs that I thought people might want to come hear me play. But when others told me I could do it, I kept at it.”

While attending college, Casey devoted ever more energy to her muse – writing, learning to trust her instincts, venturing into a recording environment, and eventually playing100-plus dates a year, wherever and whenever. All the while, her self-assurance grew. And of course, life played out, like it does, with love, loss, wonder and hope – all the stuff of great songs.

2018 would prove a crucial turning point, at legendary singer-songwriter-guitarist Richard Thompson’s esteemed Frets and Refrains songwriting camp near Woodstock, NY. Casey won a scholarship to the four-day, all-ages camp, which featured teachers Thompson, his son, Teddy, and folk icons Patty Griffin and Happy Traum. Teddy Thompson, known for unvarnished criticism of attendees’ work, would be the pivotal figure this time.

“I needed to hear from an unbiased person in the industry what they thought of my songs,” Casey says. “So a couple other campers and I played for Teddy.” Upon hearing Casey’s rollicking but wise “Pretty Words,” he said, “That’s a hit. I wouldn’t change anything.”

Richard Thompson himself gave Casey one-on-one advice. “I learned songwriting skills from him that I use to this day,” she says. “How to keep your brain active, what to do if you get stuck, how to make songs uniquely yours.”

Soon, the time came for Casey to give back, and be the generous one. Seeing a lack of opportunity for North Carolina songwriters, and encountering little support from established scene-makers, she took to heart the saying, “If you build it, they will come.” Casey launched Spotlight Sessions, a recurring songwriters-in-the-round event, which she hosts at Greensboro’s Carolina Theater. Now in its second year, Spotlight Sessions has turned into a mecca for artists and audiences eager to hear from the wealth of talent in the area. “It’s helped me grow as an artist,” Casey says. “Because it’s always inspiring to meet and interact with other artists, other performers.”

By 2019, Casey says, “I knew I had the songs in me” for a release. She was ready. Enter engineer-producer Doug Williams. After seeing Casey at Spotlight Sessions, he enthusiastically signed on to co-produce her debut. His homey studio vibe, laidback approach, and excellent ears were exactly what Casey needed to flesh out the songs that would become Not Just Pretty Words. Together, the duo created a sonic environment that veers seamlessly from uptempo country (“Pretty Words,” “The Hang Up”), to timeless, swampy folk (the Where the Crawdads Sing-inspired story-song “Marsh Girl”), to rockin’ country pop (“You and Me,” “Prove Me Wrong”) and prophetic, stripped-down balladry (“Seasons”). With Casey’s voice and acoustic guitar as focal points, the arrangements percolate with a driving rhythm section, lush harmonies, mandolin and fiddle, and unusual touches like spookily atmospheric bowed bass. Many colors, multiple soundscapes, but one intention: to touch listeners where they live, in their hearts.

“My favorite music makes me feel things deeply,” Casey says. “And I want people to be able to feel things from my songs. That’s my goal.”

With Not Just Pretty Words, Casey has definitely achieved that benchmark, and then some. Helped along by the generosity and faith of true believers, her artistry is now itself a generous act, offering listeners opportunities to connect to depths they may not even know are there, until Casey Noel, singer-songwriter, leads the way.