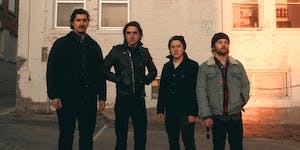 Presented by The Grey Eagle and Wothwhile Sounds

iCal
Google
Michigan Rattlers make their Grey Eagle debut in Asheville NC on Wednesday May 25th with an ALL AGES show at 8pm. Doors open at 7pm.

Lifelong friends and deep-north natives, Michigan Rattlers play heavy-hearted folk-rock with an aching dose of Midwestern nice. Graham Young (lead vocals/guitar), Adam Reed (vocals/upright bass), Christian Wilder (vocals/piano) and Tony Audia (drums) began writing music and performing together in their Northern Michigan high school. They regularly played every bar, cafe, and stage in town, developing a musical chemistry informed by the likes of AC/DC, Creedence Clearwater Revival, Bob Seger, and more. After a few years apart, Reed and Young settled down in Los Angeles, recorded a short demo, and began playing locally. The demo found its way in the hands of super-producer Johnny K, and they cut the bulk of their first EP at NRG studios in just one day. This self-titled Michigan Rattlers EP attracted glowing reviews from No Depression, Bluegrass Situation, Relix, Glide, Grammy.com and more. Rolling Stone named the band one of their “Ten New Country Artists You Need To Know.” In 2018, following a massive summer tour that included stops at Bonnaroo, Firefly and Electric Forest; the band released their highly anticipated debut full length album, Evergreen, and added pianist Christian Wilder and drummer Tony Audia to their lineup. The Michigan Rattlers are currently in the studio recording their second full length album in between tour dates.

Jack Marion and The Pearl Snap Prophets bring a youthful-exuberance and high-country swagger to the doorsteps of modern country music. The North Carolina-based band has spent the past 4 years in honky-tonks, bars, and mountain roadhouses, collecting fodder for songs along the way. There are songs about living; written in the shadows of the Blue Ridge Mountains. They are straight-from-the-hip and straight-from-the heart. No bull-honky. All truth. But they are just as catchy as any songwriting-factory-formed mega hit that will ever curse your ear.

"If young country-based bands like Jack Marion and The Pearl Snap Prophets keep raising the standards of what songs can be, maybe we can turn the tides."- NC Music Magazine