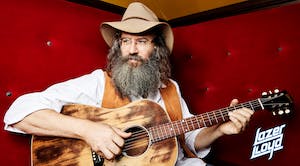 Lazer.Lloyd is a powerful and unique blend of roots rock, Americana, folk, country and blues. The international recording artist, singer-songwriter and guitarist sings about life's struggle for love, meaning, and the strength to hang on and discover joy along the way. His warm connection with each audience makes every show a new journey with acoustic heart and electric fire.

Lazer Lloyd on his music and influences...

“As a young songwriter and guitar player, I loved Neil Young with his super sensitive acoustic and singing just suddenly firing it up with searing guitar. I first heard Stevie Ray Vaughn live at 14 and my father also took me to hear Santana live - those were life-changing experiences - seeing masters who performed on a level of prayer through music on stage. That set my mind and heart on playing music for life.”

“Lazer Lloyd is a remarkable performer but even more, he has a magical charisma and aura on stage that is both wonderful and unique. He lit up our crowd at the Mammoth Festival with great songs, incendiary guitar, an amazing presence and message.” Jim Vanko , Co-Producer 23rd Annual Festival at Mammoth Lakes

"He puts soul into every note he sings and plays." Tahoe Onstage

Vintage Guitar magazine featured him as a talent to watch showing off his chops on "tough blues-rockers, soul ballads, and funky Hendrix-inspired rock".