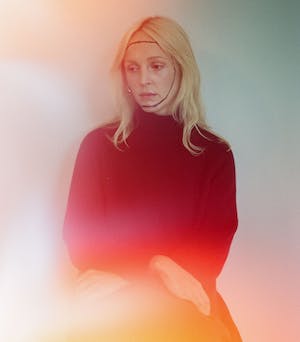 There is a line from Virgil’s epic poem The Aeneid that nearly a decade ago Laura Marling decided to have tattooed on her leg: “Varium et mutabile semper femina” it runs, translating roughly as “A woman is an ever fickle and changeable thing.” Realizing that the line was a little long for the limb, at the very last moment she opted instead for an abbreviation: “Semper femina” she chose: “Always a woman.” It makes a fitting and fascinating title for Marling’s sixth album — an intimate, devoted exploration of femininity and female relationships, and among her finest work to date. Written largely on the tour that followed 2015’s Short Movie and recorded in Los Angeles with production from Blake Mills, it is at once a distinctive and musically compelling collection of songs, run through with Marling’s fierce intelligence; a keen, beautiful and unparalleled take on womanhood.

“I started out writing it as if a man was writing about a woman,” Marling says. “And then I thought it’s not a man, it’s me — I don’t need to pretend it’s a man to justify the intimacy of the way I’m looking and feeling about women. It’s me looking specifically at women and feeling great empathy towards them and by proxy towards myself.”

The songs grew out of what Marling regards as “a masculine time” in her life. “A certain time when I’d sort of gone on this trip of abandoning any sexuality,” she says. “Now in retrospect I was hopped up on the times, but I was living in LA, and LA does have an amazing knack for removing sexuality. I found it quite scary; I was scared of what I perceived to be the disappearance of my feminine side. But it gave me an ability to look at women in a different way and consider how I’d been looked at.”

In retrospect there was a precursor to this strange period of her life — Short Movie had been concerned with the breaking down of the ego, “And then I guess piecing back together an ego you get to see it in all its parts,” she says. “And tied in with this was the magical realism of living in LA.” Having spent several years in Los Angeles, Marling now splits her time between the UK and California. “And LA makes me feel very different to England,” she says. “Now my love affair with LA is at a point where I don’t really leave my house and all my friends are English. It’s a great place to be, but it’s not an enticing fantastical adventure anymore, and I think the election has brought that home.”

Marling’s exploration of femininity is as broad as it is tender. On tracks such as Wild Once she was interested in the archetype of the wild woman and her unrestrained physicality. “In the more masculine phase of my life I got really into hiking and bouldering, scrambling up trees or whatever,” she explains. “And I just hadn’t exercised that part of myself for such a long time, and it was felt fantastic. It touched something that was really sweet and innocent. At a time when I couldn’t really find that center, I was touching on it running through a forest by Big Sur with no shoes on.”

Elsewhere she’s looking at “What’s been forbidden to me in female relationships in all forms, and at female empathy between each other, and friendships that have been really intense.” On The Valley, for instance, a track she calls “a bit of an English nostalgia trip” she writes about “broken female friendships, and how that feels to be betrayed or betray a friend or a woman in any way.”

The nature of female friendship has been a long-standing interest for Marling. “And again it’s blurred as you open up the boundaries more,” she says. “But the falling in love that you experience with friendship is so less defined than romantic or sexual love. I’ve been obsessed with that always I think,” she says. “Because I have sisters maybe, and a mother. And I think because of that there’s a high standard of trust and care that I place on myself and that I feel in my female friends as well — we have quite a high empathetic standard for each other. So I feel when that’s broken it’s so powerful. And I’m guilty of that in many respects because I’m so absent-minded. Until now I just hadn’t really thought about that being a subject matter for a song, but when I tapped into the sadness of that, or the regret, or the feeling of being on the other side of that, I found that quite a fruitful well of stuff. So there’s a lot of that on this record, that trying to make amends for those sort of broken channels.”

She also became fascinated by the life of the psychoanalyst Lou Andreas-Salome. “I came across her by accident through a love letter that [Rainer Maria] Rilke wrote,” Marling says. “I was obsessed with Rilke, and he wrote about her being the only tangible thing that he’d ever encountered in his life — the famous quote is ‘You alone are real to me’.” Marling read about Andreas-Salome extensively — from her upbringing in Russia, through her intellectual and romantic relationships with figures such as Paul Ree, Friedrich Nietzsche and Sigmund Freud, her unconsummated marriage to Friedrich Carl Andreas, and her passionate affair with Rilke which led to his Duino elegies.

Rather than her relationships with famous male figures it was Andreas-Salome’s own psychoanalytic research that Marling found particularly interesting: “Just before Freud died she wrote him a letter saying ‘I’ve been doing some research into the feminine psyche and I think you’ve got it completely wrong. Penis envy is an invention of man because women’s sexuality by its nature is internal and self-perpetuating, so there’s no lack of this or need of that. It’s this internal, inherently creative thing without men.’ And Freud wrote to her and said this is amazing and this is true, but he died two months later so it never got published. And that blew my mind. Imagine! It would’ve changed the entire psyche of the western world.”

These thoughts were shaped further by Marling’s ongoing podcast project Reversal of the Muse which saw her interviewing women from across the music industry — from famed singers such as Dolly Parton and Emmylou Harris to female sound engineers, and guitar shop owners, discussing the nature and shape of female creativity. “I would say that feminine creativity, the feminine part of the brain is in both sexes, but is inherently different to the masculine,” she says, “I had a lot of chats with Blake about how we started playing guitar,” she says, “and he said ‘I started playing because I wanted to impress girls- though I suspect that was a flippant remark rather than the whole truth. But it worked as an example as that was obviously so different to why I started playing guitar — that was never in my brain to impress boys; “and for me, playing guitar has always been tied up with my identity, it’s always been involved in myself, rather than enticing people in.”

Having produced Short Movie herself, Marling decided to enlist Mills as producer for Semper Femina. “I really enjoyed producing but it’s just not my calling,” she says. “I’d love to do it for someone else, but for myself it was too difficult to play both roles. Making the podcasts I discovered I play off the vulnerability of being a solo human being, playing a very vulnerable song in front of a microphone with six people in a control room. It’s a weird dynamic, but it has always worked for me. A lot of songwriters I know can’t bear to be overheard when they’re songwriting, but I quite like it — I write in venues or dressing rooms when there are eight people in the room. There’s something thrilling and weirdly voyeuristic about it. But I like the idea that it will be heard, and if I’m producing it feels like it might only be heard by me.”

Looking for a producer, and already a fan of his music, she was told that Mills had written a list of people he wanted to work with and that her name was on it. This is not to say recording was always straightforward, and working with a new, male producer brought familiar challenges for Marling. “I think Blake was very sweetly not sure what to do with an English girl,” she says. “It took a week or two to shake off the very set image of what I was in his mind — a very romping through the countryside delicate character from Emma. And I’ve had that so many times. And in some ways I’m think you can keep that image of me, but in other ways I have to break it in order to get work done, because it’s a really heavy block between you and what you want to get done. And also because I’d just come from producing a record myself I had to get rid of that idea of delicacy.”

More than anything on Semper Femina Marling addresses the space between the perceptions and realities of being a woman, the space in which women are not frail but powerful, creative and abundant figures. “When I was a teenager in my head you were either this delicate tragedy or you were a muse,” she says. “And they’re both such horrifyingly subjugated roles. But our culture loves female tragedy. That’s just been so ingrained over and over again, and there haven’t been enough examples of a written alternative. My main focus is re-writing the idea of tragic woman.”

If Marling sounds galvanized it’s because this album marks a shift in her career. “The time and the political climate that we live in, we’re coming to a point where there’s no need for this sort of artistic expression that I’ve been a part of,” she says. “Innocent creativity had a little flourish in the last ten years. But also I’m getting older and now I think ‘What use is that?’ It’s not rooted, not pointed, not political. For me right now I feel like it’s more important that I have a practical use.”