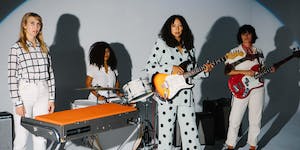 iCal
Google
La Luz hits Asheville to make their Grey Eagle debut on Friday March 18th at 9pm. It's an ALL AGES show and doors open at 8pm.

La Luz hits Asheville to make their Grey Eagle debut on Friday March 18th at 9pm. It’s an ALL AGES show and doors open at 8pm.

On their self-titled fourth album, La Luz launch themselves into a new realm of emotional intimacy for a collection of songs steeped in the mysteries of the natural world and the magic of human chemistry that has found manifestation in the musical ESP between guitarist and songwriter Shana Cleveland, bassist Lena Simon, and keyboardist Alice Sandahl.

To help shape La Luz, the band found a kindred spirit in producer Adrian Younge. Though primarily known for his work with hip-hop, soul, and jazz acts, Younge saw in La Luz a shared vision that transcended genre. “We both create music with the same attitude, and that’s what I love about them,” he says. “They are never afraid to be risky and their style is captivating. It was an honor to work with them.”

The result is an album that is both the most naturalistic and psychedelic of the band’s career. All the elements of classic La Luz are still present—the lush harmonies, the impeccable musicianship, the gorgeous melodies—but it’s a richer, earthier iteration, replete with inorganic sounds that mimic the surreality of nature—the humming of invisible bugs, the atmospheric sizzle of a hot day. La Luz is an album that celebrates love—of music, of friendship, of life in all its forms.

Singer and guitarist Livvy Bennett and drummer Dylan Hill first became acquainted in middle school. In high school, they met keyboardist Michael Hunter. After high school, the members began playing together and adopted the name Mamalarky by 2016. The band was initially active in their hometown of Austin before relocating to Los Angeles. Bennett played bass on tour with Cherry Glazerr and Hunter played with White Denim during this time.

Mamalarky released their debut EP, Fundamental Thrive Hive, in May 2018. Bassist Noor Khan joined the band late that year in response to a call for musicians put out by Bennett on Tinder.

In December 2019, the band signed to Brooklyn based record label Fire Talk. The following month, they released "Fury", the first single off their debut album. This was followed by "How To Say" in May 2020 and lead single "Schism Trek" that September. Bennett, Hunter, and Khan relocated to Atlanta late that year. The band released the final singles from their full length debut, “You Make Me Smile” and "Drug Store Model", in October and November 2020 respectively.

Mamalarky’s self-titled debut album, a culmination of two years of effort, was released on November 20, 2020. Pitchfork contributor Jesse Locke praised the band’s “complex instrumental interplay”, awarding the album a rating of 7.1 out of 10. Ben Salmon of Paste magazine gave the album a rating of 7.5, describing the album's sound as "fussed over" and "distant" but ultimately commending the group's fluency in multiple genres.