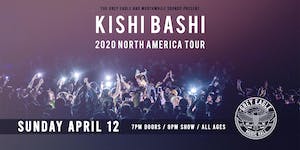 iCal
Google
Kishi Bashi returns to The Grey Eagle in Asheville NC on Sunday April 12, in celebration of his latest album, "Omoiyari."

Imagine being forced from your home. Imagine being sent to a prison camp with no trial, and no promise of release. Imagine all this happened simply because of the language you speak, the shade of your skin, or the roots of your family tree. For over 120,000 Japanese-Americans this was a reality during World War II. It’s a reality that Kishi Bashi seeks to reckon with on his latest release Omoiyari.

Omoiyari is Kishi Bashi’s fourth album -- following the acclaimed 151a (2012), Lighght (2014), and Sonderlust (2016), which have garnered serious acclaim from outlets including NPR Music, The Wall Street Journal, and The Guardian -- and his most important yet. Many of the songs were initially inspired by history and oppression, and he deftly weaves tales of love, loss, and wanting to connect listeners to the past. Channeling the hard-learned lessons of history, Omoiyari is an uncompromising musical statement on the turbulent sociopolitical atmosphere of present-day America.

“I was shocked when I saw white supremacy really starting to show its teeth again in America,“ Kishi Bashi says. “My parents are immigrants, they came to the United States from Japan post–World War II. As a minority I felt very insecure for the first time in my adult life in this country. I think that was the real trigger for this project.”

Kishi Bashi recognized parallels between the current U.S. administration’s constant talk of walls and bans, and the xenophobic anxieties that led to the forced internment of Japanese-Americans in the months following the attack on Pearl Harbor. So he immersed himself in that period, visiting former prison sites and listening to the stories of survivors, while developing musical concepts along the way. The unique creative process behind Omoiyari will be documented in a film scheduled for release in early 2020.

“I didn’t want this project to be about history, but rather the importance of history, and the lessons we can learn,” Kishi Bashi reflects. “I gravitated toward themes of empathy, compassion, and understanding as a way to overcome fear and intolerance. But I had trouble finding an English title for the piece. Omoiyari is a Japanese word. It doesn't necessarily translate as empathy, but it refers to the idea of creating compassion towards other people by thinking about them. I think the idea of omoiyari is the single biggest thing that can help us overcome aggression and conflict.”

The strong conceptual elements of Omoiyari are driven by Kishi Bashi’s captivating musical score. Stepping away from his past loop-based production model, he embraced a more collaborative approach when recording, and for the first time included contributions from other musicians, such as Mike Savino (aka Tall Tall Trees) on banjo and bass, and Nick Ogawa (aka Takenobu) on cello. Kishi Bashi’s spectacular trademark violin soundscapes are still an essential component of his sound, but the focus of Omoiyari is centered squarely on its songs. The result is his most potent and poignant collection of music to date.

On “Marigolds,” Kishi Bashi contemplates the “differences between generations that are difficult to comprehend sometimes.” “I wish that I had met you when your heart was safe to hold,” he sings over a bed of shimmering violins, conveying a sense of deep melancholy over a soaring melodic line.

“Summer of ’42” weaves a breathtaking orchestral score over a tale of love and loss in a Japanese incarceration camp. “While times were humiliating and difficult in these camps, they would make time to find love and happiness amongst the adversity,” Kishi Bashi observes.

“Violin Tsunami” builds a single violin line into a cinematic wall of sound. “A Brazilian Japanese friend of mine is a violin maker, and he presented me with a wonderful violin to play. He had named it Tsunami, and had worked on it while the Fukushima Nuclear disaster was unfolding,” Kishi Bashi explains. “This song is about the chaos that nature can create, and also about the healing and rebuilding that the human spirit is capable of.”

The songs on Omoiyari overflow with rich sounds and complex emotions, and challenge listeners to confront a difficult chapter in America’s past while acknowledging the injustices of the present. But there’s a yearning for better days threaded through several songs, a perspective that mirrors Kishi Bashi’s own hopes for a better future. “Part of the project is saying that if you're a minority there's potentially still a lot to look forward to in this country. I believe there's a paradigm shift coming, especially for minorities and those who have felt oppression. America is changing.”

But a better future is not guaranteed, and Kishi Bashi wants listeners who hold some economic or social privilege to be aware of their own role in creating change. “If you're privileged you need to understand that this country is for everybody, and we have to make that space for all people.”

“Sometimes when we look at history, it feels far away and removed. But there are fundamental lessons of love, compassion and fear that we can learn from the internment and apply to issues today concerning refugees, immigration, and minorities,” he says. “There are so many tragedies and atrocities that have happened around the world at different times in history, and I think it's really important to have the compassion to understand the suffering that people endured before you, to not repeat the past, and to really be grateful for the life you have.”

While the theme of Omoiyari is rooted in 1940s America, the album’s message is timeless. In exploring the emotional lives of the innocent Japanese-Americans who were unjustly incarcerated, Kishi Bashi hopes to nurture a sense of empathy, or omoiyari, in all who hear the album.

Tall Tall Trees is the pseudonym of songwriter and multi-instrumentalist Mike Savino. Moving to New York in the early aughts with aspirations of being a bassist in the city’s vibrant jazz and experimental music scene, Savino soon switched his focus to banjo and writing songs, resulting in the eponymous 2009 debut, Tall Tall Trees. In the decade since, Savino has toured non-stop, pioneering a world of psychedelic electric banjo music, captivating audiences with his loop-based one man shows, as well as alongside frequent collaborator, Kishi Bashi.

A Wave of Golden Things, his fourth studio album, opens with the distant crow of a rooster and takes off in a dust cloud of swirling banjo, drums and bass. The lead off track, “The Wind, She Whispers,” quickly evolves from a droning mountain melody into full-blown banjo funk, setting the precedent for an album of unexpected turns. Though the banjo is heavily featured, the influence of Pink Floyd, and Cat Stevens can be felt as much as banjo mavericks Earl Scruggs, and Bela Fleck.

Savino, who self-records and produces his music, abandoned the heavily-layered textures of 2017’s Freedays for a more organic, stripped-down approach, leaving his distinct voice and thoughtful lyrics as the centerpiece. Despite the sparse arrangements, Savino still manages to evoke the sonic imagery and pastoral landscapes that have often been hallmarks of Tall Tall Trees albums. Each of the eight songs that make up A Wave of Golden Things suggest a world unto itself, from the cosmic country-tinged, “Ask Me Again,” to the sprawling underwater lullaby “Deep Feels.”

Opting for an immersive experience over a traditional studio, Savino set up residence and a mobile recording rig on a hemp farm in the Appalachian mountains outside of Asheville, North Carolina, where he now resides. Recorded in just under three weeks, with much of it arranged on the spot, the album maintains a sense of immediacy, celebrating raw performance over perfection. “I’m giving up on my expectations, let them go and see where it takes us,” Savino sings on “Expectations,” almost seeming to revel in this experimental process.

Savino’s voice, left unadorned, can be simultaneously gentle and strong, at times sage-like in delivery. On the album’s closing title track “A Wave of Golden Things,” his soft spoken meditations on mental health reflect a new maturity in his song craft and singing. As the song develops, Savino’s voice gains confidence and his whisper becomes a fragile cry, neither full-throated nor fully secure, but at home in a warm bed of upright piano and echoing tape delay. “We all need a little peace and love right now,” he sings as if he’s at the end of his breath.

Reflective of the dark and challenging times of today, Savino’s message is ultimately one of hope and finding peace of mind in the chatter of the modern world. The last chorus reaches towards a transcendent beauty in the darkness, and makes a promise: “a wave of golden things, it waits for you.”