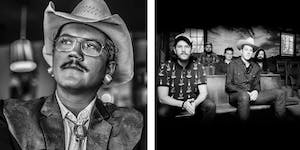 Gus Clark & The Least of His Problems + BB Palmer

iCal
Google
Gus Clark & The Least of His Problems join forces with BB Palmer for a very special co-bill at The Grey Eagle in Asheville NC on March 17th!

GUS CLARK & THE LEAST OF HIS PROBLEMS

At the tender age of eighteen, the northwest-born crooner Gus Clark hit out to explore the United States with a backpack and a mandolin, cutting his teeth playing on the street and traveling by freight train or the kindness of those still bold enough to pick up a hitchhiker. Emerging over ten years later as an accomplished vocalist and multi-instrumentalist (guitar, accordion, mandolin, and more), he now pays beautiful homage to a deep well of golden-era American music traditions, ranging from pre-WWII blues to 1960s Nashville honky tonk. In a voice that combines unique sincerity with pitch-perfect emotive richness, Clark delivers classic barn-burners, good-time dance tunes, bittersweet heartbreak ballads, and his own originals. His remarkable tenor and powerful musical presence are guaranteed to both wrench hearts and propel listeners onto the dance floor, whether Clark performs solo or backed by his rock-solid honky tonk band.

Hailing from the heart of railroad country in Opelika, Alabama, cosmic country outfit B.B. Palmer have made a name for themselves over the past several years, honing a sound steeped in the traditions of American country music.

The band’s latest offering, Krishna Country, sees the group approaching their craft with a much more expansive worldview — folding traditional Indian sounds into their work and creating a further-mesmerizing brand of ethereal roots music. On paper, it might seem an unexpected or jolting shift in direction, but for B.B. Palmer it’s simply the next step forward in their collective journey.

Make no mistake, this is still country music at its core, but the addition of sitar and horns awash in reverb elevates the overall product to something more, standing on its own as a truly unique output. Imagine if Ravi Shankar recorded with the Byrds backed by Stax’s Memphis Horns, and you’d be pretty close to imagining this Alabama outfit’s forthcoming output.

A native of Theodore, Alabama, Bernard Palmer (the band’s namesake) was raised as a strict Catholic. It wasn’t until a few years ago — following a moment of what could well be described as divine intervention — that he found himself drawn to a belief system far different from that of his youth.

“I found a copy of the Bhagavad Gita,” Palmer recalls. “I can’t remember where I found it, if someone gave it to me, or if it just materialized — but I’m thinking it’s the latter, because I just can’t put a finger on it.”

He pored over the text and found that it resonated with him on a deeply personal level. This newfound enlightenment inspired Palmer to dive even deeper into Indian culture, and he was hooked from the start. He began listening to and studying raga, a classical style of Indian music, and applied these eastern influences in his own songcraft. Krishna Country showcases his discoveries from this newfound styling, blending his honky tonk roots with a yet-untapped well of musical modes and instrumentation from India.

“It was the duality of it all that made it so natural,” he notes while mentioning that the studio had always felt tiresome and tedious prior to this project. “Everything fell into place so effortlessly. That made it unique in the way that we’ve never had in the recording process before.”

“I thought he had lost his mind,” guitarist Josh “Bucky” McKenzie says of the day Palmer floated the initial concept. “We had no money to do this. Where would we find the money, let alone someone to play sitar, horn players, engineers, extra session players, and how in the hell would we record it?”

McKenzie recalls Palmer seeming unphased by these looming challenges, as if he had already seen the project come together before it even began. Sure enough, things started to fall into place. The group were able to source a sitar player (in Alabama, of all places) on short notice, schedules lined up for their first-choice studio players, and studio staff offered their services pro-bono, excited at the prospect of this new and different endeavor. Krishna Country came together swiftly against all odds, seemingly out of thin air.

From the moment the Bhagavad Gita landed in Palmer’s possession, to the first drafts of these news songs, all the way through studio time and mastering, Krishna Country seemed inevitable despite all the perceived challenges that stood in the way. It’s an undeniably singular output from these Yellowhammer State mainstays, and a worthy entry in the canon of cosmic “American” music — with more than a dash of instant karma backing it up.