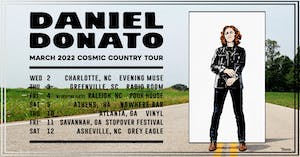 iCal
Google
Daniel Donato brings his COSMIC COUNTRY MUSIC back to The Grey Eagle in Asheville NC on Sat March 12 at 9pm. Doors at 8pm, ALL AGES show!

COVID-19 POLICY REMINDER: The Grey Eagle requires all patrons attending performances to provide proof of vaccination or negative test within 48 hours prior to the event. Currently Buncombe Co. mandates that masks be worn indoors. THIS MEANS YOU NEED TO MASK UP. Patrons will need to provide physical or digital documentation of COVID-19 vaccination or negative test. Professional negative test results must be dated no more than 48 hours prior to the event. At-home testing will not be accepted.

At the age of 14, Daniel discovered one of Nashville’s best kept secrets, The Don Kelley Band at Robert’s Western World. This legendary house band played five nights a week, four hours a night, and regularly hosted Music City’s finest guitarists. The band’s approach to their 100+ song setlist of classic country and bluegrass music was unique and packed out Nashville’s most famous Honky Tonk on a nightly basis. For three years, every Saturday, he gave the band his business card, in hopes that he could join their legendary roster.

He got the gig.

464 shows, 1856 hours, and 20,880 songs later, the ways of this band live and breathe in every note he plays and sings. The COVID-19 pandemic ended this band’s career, and in tribute to the immense inspiration they brought to Nashville, “Cosmic Country & Western Songs,” was born.

The songs and sounds from this album are the sounds of Nashville’s finest country band rocking the house in Music City’s most famous Honky Tonk on a Saturday night, with a twist of #CosmicCountry woven in.

2021, in an otherwise very difficult and competitive touring climate, has been a major year of growth for Daniel with his Lost Highway Podcast reaching new heights, career-high attendances in every market, new band member personnel helping the music acheive new dimensions, and a bullish outlook to the future. Cosmic Country is alive and well and the future is bright.

Hailing from Atlanta, GA, Frute offers a unique brand of space-themed rock, blending elements of psych-rock, funk, and americana. Their second album, "Stephen Hawking Told Me So” marks a distinct turn from their freshman album, "The Great Surround." The upcoming album explores an array of soundscapes, from the groove based "Farewell to Earth" to the western swing of "Greenhouse Boogie" to the Pink Floyd-esque "Told Me So," all infused with a galactic sensibility.

Since Frute’s genesis, the band has written, produced, and mixed all of their own music. They have also created all of their own artwork. The band’s tireless dedication is reflected in their distinctive and captivating live performances. Learn more about Frute at linktr.ee/Frute.