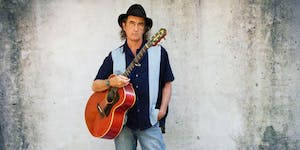 iCal
Google
James McMurtry returns to The Grey Eagle in Asheville NC on Sunday January 23 at 8pm! Doors open at 7pm and BettySoo opens the ALL AGES show

“Back before Napster and Spotify, we toured to promote record sales. Now we make records to promote tour dates.”

AUSTIN, Texas: James McMurtry spins stories with a poet’s pen (“Long Island Sound”) and a painter’s precision (“She Loves Me”). Proof: The acclaimed songwriter’s new Complicated Game. McMurtry’s first collection in six years spotlights a craftsman in absolutely peak form as he turns from political toward personal (“These Things I’ve Come to Know,” “You Got to Me”). “The lyrical theme is mostly about relationships,” McMurtry says. “It’s also a little about the big old world verses the poor little farmer or fisherman. I never make a conscious decision about what to write about.”

“How’m I Gonna Find You Now,” the record’s lead single boasts buoyant banjos and driving drums endlessly energetic. Whiplash vocals further frenzy the beat. “I’ve got a cup of black coffee so I don’t get lazy/I’ve got a rattle in the dashboard driving me crazy,” McMurtry effectively raps. “If I hit it with my fist, it’ll quit for a little while/Gonna have to stop to smoke in another mile/Headed into town gonna meet you at the mercantile/Take you to the Sonic get you grinning like a crocodile.”

Such vibrant vignettes consistently turn heads. They have for a quarter century now. Clearly, he’s only improving with time. “James McMurtry is one of my very few favorite songwriters on Earth and these days he’s working at the top of his game,” says Americana all-star Jason Isbell. “He has that rare gift of being able to make a listener laugh out loud at one line and choke up at the next. I don’t think anybody writes better lyrics.” “James writes like he’s lived a lifetime,” echoes iconic roots rocker John Mellencamp. Yes. Spin “South Dakota.” You’ll hear.

More history: McMurtry critically lauded first album Too Long in the Wasteland (1989) was produced by John Mellencamp and marked the beginning of a series of acclaimed projects for Columbia and Sugar Hill Records. In 1996, McMurtry received a Grammy nomination for Long Form Music Video for Where’d You Hide the Body. Additionally, It Had to Happen (1997) received the American Indie Award for Best Americana Album.

In 2004, McMurtry released the universally lauded Live in Aught-Three on Compadre Records. The following year, Childish Things notched arguably his most critical praise, spending six weeks at No. 1 on the Americana Music Radio Chart in 2005 and 2006. In September 2006, Childish Things and “We Can’t Make It Here” won the Americana Music Awards for Album and Song of the Year, respectively. McMurtry received more Americana Music Award nominations for 2008’s Just Us Kids. This album marked his highest Billboard 200 chart position in more than nearly two decades.

The poignant lyrics of his immense catalog still ring true today. In 2011, “We Can’t Make It Here” was cited among The Nation’s “Best Protest Songs Ever.” “‘We Can’t Make It Here,’” Bob Lefsetz wrote, “has stood the test of time because of its unmitigated truth.”

McMurtry tours year round and consistently throws down unparalleled powerhouse performances. The Washington Post notes: “Much attention is paid to James McMurtry’s lyrics and rightfully so: He creates a novel’s worth of emotion and experience in four minutes of blisteringly stark couplets. What gets overlooked, however, is that he’s an accomplished rock guitar player … serious stuff, imparted by a singularly serious band.”

It’s the voice that gets you first.

“BettySoo may well have the most gorgeous voice in Texas …if not in all contemporary folk – its purity and strength can be downright devastating.” – ACOUSTIC GUITAR

BettySoo’s vocal prowess is a thing of wonder. A world-class instrument of deft phrasing and purity, a voice that knows when to hold back and when to dive in. At her own live shows, taking a verse onstage with friends or singing harmonies in sessions with Austin’s finest, BettySoo sings with consummate loveliness and self-assurance. A voice that knows the roots of American music inside and out; coming from a most unexpected place – a diminutive Korean-American with a deceptively girl-next-door demeanor.

Then the performance reels you in.

“Truly remarkable. BettySoo’s sharp, often self-deprecating humor skillfully wove the songs together. Her clear, evocative voice and poignant lyrics recall Patty Griffin and Joni Mitchell, and did I mention she’s a hell of a guitar player?”

Touring the unforgiving circuit of listening rooms, clubs and festivals, BettySoo has mastered the art of performance. A funny anecdote sets up a song of heartbreak and need; a witty rejoinder belies the dark truths that underpin much of her work.

And that’s when you notice the songs.

“Beautiful, heart-wrenching songwriting that is also edgy and unwavering.”

“Exceptionally well written and arranged songs with a confidence that speaks volumes.”

They call it the live music capital of the world. Austin, Texas, is a city where the musical bar is set high. Since exploding on the Austin scene a decade ago, BettySoo has carved out an enviable niche among the very best the city has to offer.

Here’s what BettySoo has been up to:

Debuted two full-band, full-throated songs from her hotly-anticipated China Girl: The Songs of David Bowie and David Byrne at a packed-to-the-rafters benefit for beloved Austin bassist George Reiff with artists like Chris Robinson of the Black Crowes and Patty Griffin.

Wrote, recorded, and toured in Europe and the U.S. with Rebecca Loebe and Grace Pettis for the new buzz-heavy trio Nobody’s Girl, celebrating the release of their debut EP Waterline with Lucky Hound Records in Fall 2018 and their self-titled album July 2021.

Appeared at a star-studded tribute for mentor Jimmy LaFave, bringing tears to every eye with a devastating, stripped-down version of LaFave’s “Worn Out American Dream.”

Laid down vocals for the second Charlie Faye & The Fayettes record, a side project harkening back to the days of Motown.

…and she still managed to find the time to sit in at gigs with friends such as Butch Hancock (the Flatlanders), Michael Fracasso, Jaimee Harris, and Jon Dee Graham.

BettySoo is as Texan as they come.

Raised outside Houston by first-generation Korean immigrant parents, educated at UT, she grew up listening to the Great American songbook and country radio. Older sisters led her to the world of singer/songwriters, and nights spent at The Cactus Café and Hole In The Wall turned her on to the legacy of Texas song.

Her singing has been heard on Riverdale and Girl Boss, and her songs formed the musical backbone to Christine Hoang’s 2017 play A Girl Named Sue, singled out by Austin360.com in their review as “gorgeous, moving ballads comment(ing) on the themes of the scenes they punctuate.”

The future looks auspicious for BettySoo.

Until the novel corona-virus shutdown, the Nobody’s Girl project was touring nonstop, and their intelligent lyrics and tightly-woven harmonies keep their audiences entranced. The trio has recorded a full-length album featuring players such as Charlie Sexton (Bob Dylan), J.J. Johnson (Tedeschi Trucks), Glenn Fukunaga (Dixie Chicks), David Grissom (Buddy Guy, Allman Brothers, Ringo Starr), and Michael Ramos (John Mellencamp, BoDeans), who reprised his role as producer. She joined Bonnie Whitmore (“[email protected]#k With Sad Girls”) in support of James McMurtry’s national tours. You’d likely see her onstage singing harmonies at CD release shows for artists such as Eliza Gilkyson, James Hyland, and Kim Richey. Music programmers have an embarrassment of riches to choose from, and listeners still have the opportunity to re-familiarize – or hear for the first time – the extraordinary talent that is BettySoo.

In the Time of COVID-19, BettySoo can be found cutting a unique path through the broad streaming landscape — and as with everything she does, she has approached it in a way that invites authentic connection, encourages compassion, and merits listening.