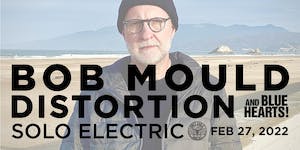 Legendary musician Bob Mould announces his “Distortion and Blue Hearts!” tour starting September 16, 2021, in Boston at Paradise. The tour is in two parts. For the first three weeks, Bob will be joined by Jason Narducy on bass and drummer Jon Wurster. Beginning October 15 in Bloomington, IL, Mould will perform “Solo Distortion” electric shows (full run of dates and locations below).

Mould’s live shows will span his entire 40+ year career, including songs from the Distortion collection and from his landmark band Hüsker Dü, as well as songs from last year’s explosive and critically acclaimed album Blue Hearts — about which Rolling Stone’s 4 out of 5 star review raved, “feels like a lost Hüsker Dü album with Mould howling invective over his buzzsawing guitar.”

“It’s been a year and a half away from the stage. I’ve missed the noise, the sweat, and seeing your smiling faces. I’m fully vaccinated, and I hope you are too, because this Fall will be a punk rock party with the band — and the solo shows will be loud and proud as well. It’s time to make up lost time, reconnect, and celebrate together with live music!”

As with the previously released box sets in the Distortion collection, each album has been mastered by Jeff Lipton and Maria Rice at Peerless Mastering in Boston and is presented with brand new artwork designed by illustrator Simon Marchner and pressed on 140g clear vinyl with unique splatter effects. This box set includes 4 live albums: Live At The Cabaret Metro, 1989; the Sugar album The Joke Is Always On Us, Sometimes; LiveDog98 (first time on vinyl), and Live at ATP 2008 (first time on vinyl). In addition, the set includes a 28-page companion booklet featuring liner notes by journalist Keith Cameron; contributions from Bully’s Alicia Bognanno; rare photographs and memorabilia, and a bonus LP Distortion Plus: Live, which features live rarities including B-Sides and stand-out tracks from the Circle of Friends concert film.

Discover more about the box sets including full track listings and FAQs here:

“Early rise, start the fire, till the rows, pass the tithes.” So starts H.C. McEntire’s sophomore release, Eno Axis. It’s a set of directions delivered with assurance and authority, reaching the listener without pretension almost as a sermon or spell. McEntire has always had one foot planted in the traditional country gospel roots of her upbringing while boldly wrestling with its complications, creating an Americana sound of her own. But that has never rung as true as it does now on the transcendent psalms of Eno Axis.

Unlike McEntire’s solo debut, LIONHEART, which was recorded in sporadic bouts and fits while she was touring, Eno Axis is firmly rooted in place. After two years working all over the world as a backup singer in Angel Olsen’s band, McEntire came home to a hundred-year-old farmhouse tucked away in the woods of Durham, North Carolina, right on the Eno River. Here, McEntire was able to refocus. Like the blue-collar Appalachian kin she descended from, her days were scheduled by the clockwork of the Earth’s rotation: splitting wood, stacking it, weeding and watering the garden, walking the dog past the bridge and back—and every evening on the front porch, watching dusk fall. Eno Axis emerges from this time as the strongest work McEntire has shared yet.

“To all the winds—hold high the hymnal, gather blessings by the fistful,” McEntire sings in her celebration of the Eno on “River’s Jaw.” McEntire doesn’t write lyrics; she writes poetry. Growing up in the tiny rural community of Green Creek, outside Tryon, North Carolina, she knows how to tell a story. And just as Loretta Lynn sang about watching her mama’s fingers bleed on the washboard in “Coal Miner’s Daughter,” McEntire, too, takes the listener by the hand and pulls them into her own experience. On “One Eye Open” McEntire revisits her childhood Sunday school room and reckons with Christian fundamentalism. On “Footman’s Coat,” she ruminates on time, biological clocks, and the path of possibilities left in her past.

Tracked and mixed at the Fidelitorium with a full backing band, many of the songs on Eno Axis feature scratch first takes of McEntire’s lead vocals, initially meant to be thrown out and redone. This rawness creates an immediacy, her self-assured, instinct- driven, and mesmerizing delivery complementing Eno Axis’ lush acoustics and warm tones. After a dreamy atmospheric interlude, “Time, On Fire” builds and retracts with a driving pop drum beat, exploring movement like the ebb and flow of a river, culminating in a soaring guitar solo. And just as a river’s current sometimes takes us somewhere unexpected, into new territory where we never knew we could go, Eno Axis closes with one of the album’s most revelatory experiences—a new, glossier cover of “Houses of the Holy” by Led Zeppelin. Under McEntire’s empowering reconstruction of this rock ’n’ roll classic, the masculine, driving signature guitar vanishes, and instead we’re left with one of the inimitable queer voices of our time bashfully asking, “Can I take you to the movies?”

With Eno Axis, H.C. McEntire establishes herself as a force to be reckoned with in the greater American musical landscape. These songs transcend country and gospel, folk and rock—they’re poems directed straight to the listener, simple psalms on how the sun falls, how the train passes, how love grows and bends. McEntire inspires us to find the stillness within our own lives—a remarkable clear-ringing declaration for our uncertain times.