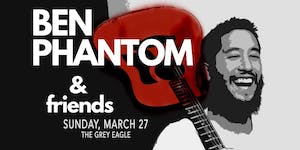 iCal
Google
Ben Phantom plays The Grey Eagle in Asheville NC on Sunday March 27 at 7pm for his first ticketed show since the pandemic! All ages show.

Ben Phantom is a songwriter, videographer, multi instrumentalist, music producer, traveler, and long distance hiker. His path, carved by music, has taken him from the North American wilderness to Vietnam, Cambodia, Israel, Central America, and finally to his mountain home in Asheville, North Carolina. Phantom is a passionate and captivating performer who writes from the heart , speaks to the soul, and never forgets to find the humor in life. He believes that we heal each other through building community, developing deep relationships, and being of service.

As a Vietnamese Jewish American, Phantom uses his music to bridge cultural barriers, honor the past, and create a better future. He carries a strong message of hope and resilience; his mission is to tell stories that heal and create sustainable community.

In 2014, Phantom walked from Mexico to Canada with a guitar and all his belongings on his back. The 2,668 mile journey transformed his relationship with music; he began writing songs drawn from his experiences on the trail as well as his struggles with depression, addiction, loss and love. The music offered hope and solace, to him and to his audiences. By sharing his music, videos, and personal story, he has inspired and connected with people all over the world.

One of the definitions of “phantom” is “a figment of the imagination.” Typically this has a negative connotation, but Phantom (from his birth name, Phan) sees it instead as an opportunity to create a better reality by using our imagination creatively and positively, in every area of our lives. His commitment to creative risk taking led to confronting his fear of technology and taking ownership of his artistic process. Embracing risk, he asked for help (a vital and often overlooked part of the creative process) and established a home studio, where he records, edits, and films much of his own work.

Phantom has a rich and diverse history of musical experience. After studying jazz and classical music in college, Phantom began his professional career as a founding member of the Richmond Afrobeat Movement, a blend of jazz, funk and African dance music . He then joined a bluegrass and folk band, the Rusty Strings, and discovered the joy in sitting on a porch and singing together with others, simply for the love of music.

After recording his first solo EP, “Hold On, Let Go,” he assembled a band, the Soul Symphony, made up of some of the best musicians in Asheville. The band’s debut album, “Dreams in Modern Folk,” premiered to a sold – out crowd at the Altamont Theatre, one of Asheville’s finest listening rooms. The popularity of the band ’s high energy sound, which combines fiery improvisation with rich composition, led to a successful kickstarter campaign to fund their next album, “Fear is the Teacher,” which the band recorded with three- time Grammy Award- winning producer Matt Williams.

Phantom is a prolific poet, songwriter, and instrumentalist, with the soul of an improviser. He crafts his songs to give room for improvisation, presence, and self-expression in the moment.

He believes that the best live music is when everyone playing is co-creating – which means that every one of his concerts offers audiences a different sound and a unique experience. He performs both as a solo artist and in collaboration with a wide variety of other musicians, videographers, and producers, including Gypsy Grass, a group of virtuoso musician which Phantom founded out of a desire to play a variety of fun genres with one band–bluegrass, jazz, pop and rap.