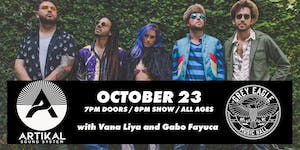 Artikal Sound System is a reggae band from Delray Beach, Florida. Blending roots and modern sounds under smooth female vocals, they put their efforts towards bringing love, good vibes and a dancing mood wherever they go.

Over the years, Artikal Sound System has united American, Jamaican & Hispanic Reggae culture. Performing nationally and internationally, their collaborations with some of the most influential musicians and artists in the reggae scene have included: The Abbysinians; Apple Gabriel of Israel Vibration; and Biggz General, a descendant of Bob Marley himself. The band has charted #2 on the Billboard Reggae Charts multiple times and has had the honor of sharing the stage with Pepper, Dirty Heads, The Wailers, Steel Pulse, Yellowman, Less Than Jake, The Aggrolites, Jesse Royal, Josh Heinrichs and Skillinjah.

Nirvana Goberdhan grew up in Deer Park, New York, about 45 miles east of Manhattan. Her parents are from Guyana, at the southernmost end of the Caribbean. From early on, Vana was surrounded by soca, calypso, dancehall, reggae music.

For Christmas of 2014, her mom gave her a ukulele and a few years later, she began covering songs by her favorite artists like Sublime, Slightly Stoopid and Pepper. The combination of the ukulele and her soft voice put a unique twist on some reggae-rock staples. Artists like 311, Rebelution, Stick Figure and SOJA shared Vana’s covers across social media platforms.

​After gaining some traction, in April of 2018 Vana signed with Pepper's LAW Records and released her debut single "Show Me" with the help of musician Nick Gudzan and producers Greg Shields (Kash’d Out) & Josh Saldate. Subsequently, she pulled together a backing band based in Long Island.

Vana’s single “Surface” was released October 7th in honor of Mental Health Awareness Week. She decided to use her platform to talk about her personal struggles and become a voice for mental health. She released the song with a statement and video that share her story to let people know they aren’t alone and she hopes to inspire others to seek the help they need.​

In November, Vana visited Great Stone Studios in Oakland, CA. She recorded "Go For It" with Johnny Cosmic of Stick Figure. She also has a duo song with Happy Madison star Peter Dante called "Give Love Get Love". Vana is currently working on her debut album which will be co-written and produced by Johnny Cosmic.