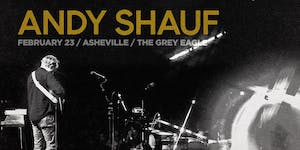 Few artists are storytellers as deft and disarmingly observational as Andy Shauf. The Toronto-based, Saskatchewan-raised musician's songs unfold like short fiction: they're densely layered with colorful characters and a rich emotional depth. On his new album The Neon Skyline (out January 24 via ANTI-), he sets a familiar scene of inviting a friend for beers on the opening title track: "I said, 'Come to the Skyline, I’ll be washing my sins away.' He just laughed, said 'I’ll be late, you know how I can be.'" The LP's 11 interconnected tracks follow a simple plot: the narrator goes to his neighborhood dive, finds out his ex is back in town, and she eventually shows up. While its overarching narrative is riveting, the real thrill of the album comes from how Shauf finds the humanity and humor in a typical night out and the ashes of a past relationship.

His last full-length 2016's The Party was an impressive collection of ornate and affecting songs that followed different attendees of a house party. Shauf's attention-to-detail in his writing evoked Randy Newman and his unorthodox, flowing lyrical phrasing recalled Joni Mitchell. Though that album was his breakthrough, his undeniable songwriting talent has been long evident. Raised in Bienfait, Saskatchewan, he cut his teeth in the nearby Regina music community. His 2012 LP The Bearer of Bad News documented his already-formed musical ambition and showcased Shauf's burgeoning voice as a narrative songwriter with songs like "Hometown Hero," "Wendell Walker," and "My Dear Helen" feeling like standalone, self-contained worlds. In 2018, his band Foxwarren, formed over 10 years ago with childhood friends, released a self-titled album where Pitchfork recognized how "Shauf has diligently refined his storytelling during the last decade.”

The Party earned a spot on the Polaris Music Prize 2016 shortlist and launched Shauf to an appearance on The Late Late Show with James Corden as well as glowing accolades from NPR, The Washington Post, The Guardian, and more. "That LP was a concept record and it really made me want to do a better album. I wanted to have a more cohesive story," says Shauf. Where the concept of The Party revealed itself midway through the writing process, he knew the story he wanted to tell on The Neon Skyline from the start. "I kept coming back to the same situation of one guy going to a bar, which was basically exactly what I was doing at the time. These songs are fictional but it's not too far off from where my life was," Shauf explains.

For The Neon Skyline, Shauf chose to start each composition on guitar instead of his usual piano. He says, "I wanted to be able to sit down and play each song with just a guitar without having to rely on some sort of a clever arrangement to make it whole." The resulting album finds its immediacy in simplicity. While the arrangements on folksy "The Moon" are unfussy and song-centered like the best Gordon Lightfoot offerings, his drive to experiment is still obvious. This is especially so on the unmoored relationship autopsy "Thirteen Hours," which boasts an arrangement that's both jazzy and adventurous.

Like he's done throughout his career, Shauf wrote, performed, arranged, and produced every song on The Neon Skyline, this time at his new studio space in the west end of Toronto. Happy accidents like Shauf testing out a new spring reverb pedal led to album cuts like the woozy closer "Changer" and experimenting with tape machines forced him to simplify how he'd arrange the tracks. Over the course of a year-and-a-half, Shauf ended up with almost 50 songs all about the same night at the bar. Though paring down his massive body of work to a single album's worth of material was a challenge for Shauf, the final tracklist is seamless and fully-formed.

As much as The Neon Skyline is about a normal night at a bar with friends and a bartender who knows exactly what you'll order before you sit down, the album is also about the painful processing of a lost love. Lead single "Things I Do" examines the dissolution of the narrator's past relationship. Over tense and jazz-minded instrumentation, Shauf sings, "Seems like I should have known better than to turn my head like it didn't matter. Why do I do the things I do when I know I am losing you?" He explains, "a lot of this record is a breakup record. I haven't had a breakup in a long time, but a lot of relationships have had one of those nights where one person shows up somewhere when they weren't supposed to and then picks a fight with their partner." Elsewhere, songs like "Clove Cigarette" explore the better times, honing in on a memory that "takes me back to your summer dress."

With any album about a lost love, the key ingredient is a generosity and kindness that can only come from a writer as empathic as Shauf. On the standout personality-filled single "Try Again," the narrator, his friends, and his ex find themselves at a new bar. The former lovers' reunion is awkwardly funny and even sweet, as he sings, "Somewhere between drunkenness and charity, she puts her hand on the sleeve of my coat. She says 'I’ve missed this.' I say “I know, I’ve missed you too.” She says, 'I was actually talking about your coat.'" It's a charming moment on a record filled with them. Shauf's characters are all sympathetic here, people who share countless inside jokes, shots, and life-or-death musings on things like reincarnation when the night gets hazy.

On top of heartbreak, friendship, and the mundane moments of humanity that define his songwriting, Shauf makes music that explores how easy it is to find yourself in familiar patterns and repeat the same mistakes of your past. His characters wonder, "Did this relationship end too soon? Would going to another bar cheer my friend up?" Or in the case of the foreboding "Living Room," where a character asks herself, "How hard is it to give a shit?" the songs on The Neon Skyline ultimately take solace in accepting that life goes on and things will be okay. Shauf says, "there's moments on the album where the characters are thinking 'this is the end of the world.' But there are also moments with some clarity and perspective: Nothing is the end of the world."

On Sundry Rock Song Stock, Yves Jarvis continues to refine his creative approach to the core of his being, where music and life intertwine in harmonious fashion. The latest album from the Montreal-based musician fuses genre elements into a symbiotic relationship where wistful folk, tender R&B, pastoral prog, and musique concrète experiments feed into one another to grow lush new forms. Though he maintains an air of mystery with his lyrics, Jarvis’s whisper-soft words can be interpreted as both deeply personal and politically motivated in ways we haven’t heard from him before.

Resuming the practice of color theory that informed his 2017 album Good Will Come To You (morning yellow optimism) and 2019’s The Same But By Different Means (midnight blue contemplation), Sundry Rock Song Stock is infused with the natural state of green. As Jarvis explains, it’s the color he most closely connects to his personality, moving beyond an aesthetic attraction into feelings of wildness, boundless energy, and an anti-establishment streak permeating his 23 years on the planet.

“I experienced a musical breakthrough with that bright, easy sound of my last two albums,” says Jarvis. “It felt good to make at the time, but it counters my essence. People think I’m calm, but I’m very not calm, and I’m happy to elaborate on it now. This album came together exceptionally easy in reaction to that nighttime shit. This green is epitomized. This album is reduced.”

While The Same But By Different Means stretches out across 22 sonic sketches ranging in length from 14 seconds to eight minutes, Sundry Rock Song Stocks takes a more traditional approach with its 10 concise tunes. Jarvis’s preferred self-contained process found him recording every instrument, mixing the album, and even painting the portrait on its cover. The only outside contribution came from engineer Mark Lawson (Arcade Fire, Basia Bulat, Peter Gabriel), who helped roll tape while Jarvis played drums.

As a pre-teen street corner busker, some of Jarvis’s earliest performances took place outside. He returned to an open-air environment for this album’s creation, setting up a makeshift studio to lay down its foundation of guitar, Nord synth, and Rhodes electric piano. Recording on a reel-to-reel tape machine, he experimented with various off-kilter techniques including a softly tapped steel drum drenched in effects, or melodies played on a wine glass meant to mimic a flute. “I want my recordings to be naturalist, so from that sense I am ideally making them outside,” says Jarvis. “More than a musician or a singer, I’m a producer, and any studio I’m in will become my bedroom. Creation is my life and I don’t compartmentalize it at all.”

Since his earliest home recordings, Jarvis has taken a Sun Ra inspired attitude with windows left wide open so every sound that filters into his songs becomes part of them. However, he also approached this album with a newfound sense of intention, drawing on the meticulous methods of progressive rock groups King Crimson and Yes, whose epic compositions conjure the vast landscapes of the British countryside. “Their music is not really songwriting,” says Jarvis. “It’s cycling motifs and vignettes. I think of it like a room that you can walk into and then out of.”

Other influences on Sundry Rock Song Stock include Miles Davis, Italian avant-pop composer Franco Battiato, and Dutch post-punk band The Ex, who fuse radical politics with melodic, body-moving grooves. Jarvis may be less direct in his lyrics, but makes his feelings implicit through the use of vivid metaphors. Recording vocals in a free-associative, phonetic stream of consciousness that he compares to Lil Wayne, Jarvis says the meanings behind his songs are revealed when a poetic turn of phrase tumbles off his tongue.

“Victim” alludes to intergenerational racism and violence, as he sings, “I’m a victim of the same old stuff my father was,” before warning, “I’m a vitriolic mass of dynamite just bound to ignite.” On “For Props,” Jarvis fires back at a wealthy class that “can’t empathize or reciprocate,” alongside others in his social circles “pandering for props.” Jealousy and judgemental behaviour earn his ire on “Semula,” with its exhausted opening lines: “It’s your aim to shame me / just please spare me your sanctimony.” Happily, the album closes on a note of contentment with the softly swaying love song “Fact Almighty,” paying tribute to the romantic partner with whom Jarvis shares an ongoing evolution: “I depend on you and you on me / from insular growth one will bloom.”

“When you better yourself, you better the world,” Jarvis concludes. “Even if you only interact with one person in your life, the effect of trying to see things for what they are is vast. Change can feel like a fantasy, but I’m not fatalistic about it. I make music because I get results that way. It’s why I promote creativity, whatever that means for anyone.”