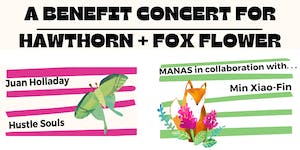 A Benefit Concert for Hawthorn+Fox Flower

Hawthorn+Fox Flower Montessori School is a non-profit, community-based school that serves children 3-12 in Woodfin, NC. Being a teacher-led program, the teachers are also the administration and work hard to blur the lines of home and school and foster deep relationships with the children and their families. Hathorn + Fox Flower is proud to serve a wide variety of socio-economic groups while constantly working towards an anti-racist and anti-bias community.

Hailing from the desert southwest, Juan Holladay writes songs in the tradition of three chords and the truth, but with more chords and more truth. In 2001, he came to Western North Carolina to attend Warren Wilson College, and he stayed in the Asheville area, after graduation, to become a father, and form a much loved local band, the Secret B-Sides. In addition to working as a sideman for family entertainers Billy Jonas and Secret Agent 23 Skidoo, Juan has also been working on beat-driven, down-tempo, solo material. His latest solo album, ‘Beauty Sleep’ is available on most digital platforms, as well as Bandcamp.

Hustle Souls is an Asheville, NC-based soul band who blend dust-covered-vinyl nostalgia with modern sensibility; recently named a Music Connection Magazine Hot 100 Live Unsigned Artists & Bands. Hustle Souls music has been called a “generation-jumping mashup of new school second line funk with old school vintage soul.” American Blues Scene and “intimate soul… with a Curtis Mayfield like warmth.” Bluestown Music. Roaring B3 organ, jubilant brass and ripping electric guitar are balanced with 3-part vocal harmony and a lust for songwriting that earned them spot in the 2020 International Songwriting Competition semi-finals and has been praised as “worthy of being included in that brilliant soul music canon, a heritage that features some of the greatest performers and writers that have ever graced this earth…” Aldora Britian Records. With relentless touring, sold out shows and major festival appearances it is no wonder why the band has earned a reputation as one of the East Coast’s most promising acts.

MANAS is a duo comprised of guitarist Tashi Dorji and drummer Thom Nguyen. “As a duo, MANAS explores lots of improvisational ground, ranging from extreme sideways expansions of sonics texture — with Tashi’s guitar moving decisively outward while Thom’s drums explode in a mostly (but not entirely) parallel plane — to repetative reflecto passages that curl up into a tight ball before achieving escape velocity. The record is a blast, with deceptively arch liner notes by none other than Ben Chasny, who has been one of Tashi’s loudest cheerleaders for many a moon.” – Byron Coley

Few artists have done more to both honor and reinvent the 2000-year history of the pipa than renowned soloist, vocalist and composer Min Xiao-Fen. Classically trained in her native China, Min was an in-demand interpreter of traditional music before relocating to the United States and forging a new path for her instrument alongside many of the leading lights in modern jazz, free improvisation, experimental and contemporary classical music. The Village Voice has lauded her as an artist who “has taken her ancient Chinese string instrument into the future,” while the New York Times has raved that her singular work “has traversed a sweeping musical odyssey.”

Ms. Min’s expressive approach to the four-stringed lute has led to collaborations with such inventive luminaries as Wadada Leo Smith, Derek Bailey, Randy Weston, John Zorn, Christian Marclay, DJ Spooky and Björk. Her Blue Pipa Trio commingles legendary trumpeter Buck Clayton’s Kansas City swing with the music of Li Jinhui, the “Father of Chinese popular music,” in a project titled “From Harlem to Shanghai and Back.” Min’s 2012 album Dim Sum spotlighted the stunning scope of her original compositions, while her latest release, Mao, Monk and Me, is a deeply personal exploration of the music of Thelonious Monk combined with Chinese folk tunes and children’s songs remembered from her childhood in the ancient capital of Nanjing.

In May 2016, Min was the principal soloist with Washington D.C.’s PostClassical Ensemble for the world premiere of Daniel Schnyder’s “Concerto for Pipa & Orchestra,” written expressly for Min by the Swiss-American composer. Still a revered performer of traditional Chinese repertoire, she has been a featured soloist with a number of leading symphony orchestras.

In February 2018, Min premiered her original score, a duo with acclaimed guitarist Rez Abbasi, for the long-lost 1934 Chinese silent film The Goddess. In August, she premiered Alan Chan’s “Moon Walk” for pipa and Jazz Orchestra. That major event follows a fruitful 2017, when Min served as artist-in-residence with the Sound of Dragon Society at the Vancouver International Jazz Festival, and was a guiding artists for the Creative Music Studio in New York, performing with founder Karl Berger and his CMS Improvisers Orchestra in the fall. She is the founder of Blue Pipa Inc. and currently lives in New York.