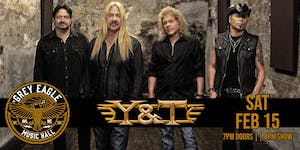 Before Mötley Crüe, before RATT, even before there was a Metallica, Y&T was slogging away in sweaty rock clubs around America. When the band formed in the early 1970s, little did they know they would set the standard for hard rock bands that trailed. Many of the biggest acts of the ’80s became popular opening for headliners Y&T—and cut their teeth on the band, as evidenced by the Y&T mentions in tell-all books by acts such as Metallica and Mötley Crüe.

Born in Oakland, California, Y&T is one of the San Francisco Bay Area’s own innovators of the hard rock sound. Whether performing to a festival crowd of fifty-thousand or in an intimate nightclub, Y&T’s high-energy set and passionate performances still captivate legions of fans around the globe, proving Y&T’s music timeless.

With a discography of 18 albums, three greatest hits collections, plus a boxed set, Y&T has sold over four million albums since their 1974 inception. The band’s most recent single I’m Coming Home has climbed to roughly 1.5 million views on YouTube. Y&T received extensive airplay with hits such as Forever, Rescue Me, Mean Streak, Don’t Stop Runnin’, and Summertime Girls—which played in heavy rotation on MTV. Y&T songs have been featured in a multitude of movies and television shows, including Real Genius, Out of Bounds, Baywatch, and Hunter. After five top 100 albums, songs that tipped into the 40s, two Bammie Awards, and many international television appearances, Y&T’s hits are still played on VH1 Classic and classic rock radio stations worldwide.

With the passing of Kennemore, Haze, and Alves, it’s Meniketti who carries on the legacy that is Y&T. Y&T continues to tour the world, featuring the dynamic original frontman Dave Meniketti (lead guitar/lead vocals), John Nymann (guitar/vocals), Aaron Leigh (bass/vocals), and Mike Vanderhule (drums/vocals), playing songs that span the band’s five-decade career and including all the hits and fan favorites. Prepare to have your face melted.

If you long for the sounds of such vintage hard rock acts as Van Halen, Dokken, Queensryche, and Aerosmith (to name a few), then the Virginia-based quartet, Red Reign, is most definitely the band for you. Originally formed in summer of 2013 in Richmond, Red Reign singer/guitarist Carlton “Bubba”McMichael and drummer Sammy Lee started the group, after leaving a cover band to pursue all original music. A month after putting the plan together, bassist Larry Moore was added to the band, and guitarist Stevie Shred was added in early fall of 2015 to complete the band.

The group is hard at work on the follow-up to their debut full-length (‘Chasing Shadows’) – which is a yet-to-be-titled EP, that is being overseen by Grammy-nominated producer, David Ivory (Halestorm, Roots, Silvertide). “After signing with Chipster PR, we were directed to David Ivory, to help with the rewriting and rearrangement of songs for our upcoming CD,” explains Sammy. “David made the songs flow better rhythmically and brought in fresh ideas, to build on the original foundation of the songs. He also brought a different vision of how the songs were played, to put the band in more of a mainstream direction.”

Despite the recording not yet being completed, Sammy already has some favorite tracks to list off the upcoming disc. “All songs are great, but a couple that stand out are “Not That Way,””Chains,””Toxic.” But I would definitely say “Not That Way” is the most radio freindly, mainstream song. It has a great hooks, melodies and is so catchy that it will appeal to ALL music lovers.”

And the band is already making believers out of the music press, such as the following quote from Pitriff.com – “Listening to Red Reign, vocalist/guitarist Carlton McMichael jumps to the forefront as the leader of this band. His voice is clean without sounding dated, and his guitar playing is about as good as any unsigned rock guitarist I’ve heard in awhile. While he’s clearly a disciple of Eddie Van Halen, it’s equally clear that his pallet has been fleshed out with everything from ’70s era Blackmore through modern era crunch that is recognizable without having a figurehead player to hold it’s mantle. McMichael is not a solo act though, as he’s perfectly complimented by an underbelly created by bassist Larry Moore and drummer Sammy Lee.”And now with Stevie on board, his George Lynch/Slash-type leads will add a modern rock and roll edge.

While touring plans are yet to be determined in support of the upcoming release, Sammy hints at what fans can expect when attending a Red Reign performance. “When coming to a Red Reign show, you can expect a energetic, enthusiastic, genuine, high energy rock show, that is reminiscent of the ‘80s rock bands.”

And lastly, what lays ahead for Red Reign? “We look forward for the national release of the new EP. We then hope to promote and back that up with live performances. And by the way, the writing process has already started for the next release!”