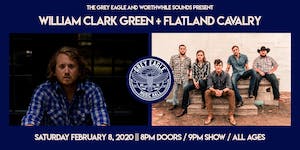 I first met William Clark Green in about 2010, at that time just emerging among Texas' musical cast of characters as a young hopeful. Most clear in my memory, even amid the party that a live music backstage scene can tend to be, Will was the happiest guy in the place – clearly exactly where he wanted to be, and loving every second. This was a contagious vibe from the outset, one that Will had no trouble channeling into music that rings in the heart of the listener, and a live show as inspiring as it is entertaining. Between two acclaimed and successful albums, 2012’s Rose Queen and 2015’s Ringling Road, and what now clocks in at a near-decade's worth of dogged road work, William Clark Green has established himself as one of the most important voices of his genre - a voice that now pipes up again on his anticipated new album, Hebert Island.

Texas is a big place, complete with fully distinct sub-territories - we reserve the right to bust into several states, should that become strategically expedient - and our traveling musical artists tend to become experts on the rich mosaic that makes up Texas' cultural geography. Will has found himself onstage in a growing portion of her 254 counties, and has called several his home; as he puts it, "I kinda spend six years everywhere". Childhood northeast in Tyler, high school years in College Station, college years at Texas Tech in Lubbock, early music career years in the north-central hamlet of Eastland, and lately his most urban digs so far, in Fort Worth - but deep down, Will's Cajun roots call to him incessantly, and thus southeast Texas is never far from his mind. The new album is named for Will's retreat at Hebert Island (say "AY-Bear", though you'll occasionally hear "HEE-Bert") near Beaumont, and refers to the hilltop upon which his camphouse sits - not an actual island, but a potential one, should the occasional flood come to pass; high ground is valuable in this landscape. Will considers himself a "half-ass coon-ass" - a distantly-descended Cajun, but one who holds a deep appreciation for that history and that way of life. "It's a real place", Will insists, with the feeling that only such a beloved space can foster - his family has owned it since 1869, in the early years of Reconstruction, and is where they established one of the state's first rice farming operations. It's a place that echoes through time for William Clark Green, connecting his family's past and tradition to who he is as an artist, and as a man, today.

It's been over three years since Ringling Road. "I'm not gonna force songs," Will sighs. "We could have finished the record a long time ago, but we didn't like the mixes - we're the bosses, and we don't have to listen to ourselves." The pressures and deadlines of the professional recording artist are nothing new, and while he certainly notices that pressure, Will recognizes it to be a good problem to have. "I remember when no one gave a shit, so yeah, it's incredible to have that want-to. So far, every record I've come out with has been my best record - I wrote my ass off for this one. I wanted to make sure it beat Ringling Road, and I'm not bragging on myself - I just knew it was going to take effort."

That effort has paid off; Hebert Island is a stellar new batch of songs from a guy who has gone to great lengths to keep his energy focused, through all distraction, on quality songcraft. "My favorite songwriter is Guy Clark - the songwriter's songwriter. It's what I've always cared about the most...the craft of songs is really where it's at for me. I think good songs are undeniable." Mostly recorded at Nashville’s Sound Emporium with Benjy Davis at the board, the new album also features players who have been backing Will for near the full ride, including guitarist Steven Marcus and bassist Cameron Moreland. “Goner” stands as a shimmering, no-hard-feelings take on the moment of breakup, the protagonist of the quasi-travelogue “Stay” understands that it doesn’t matter where you are, as long as you’re close to love, and the ballad “She Loves Horses” exemplifies both the warmth and strength that’s developed in Will’s songwriting and the performance power of his players.

Will's desired contribution to the world is songs that change lives for the better, and he realizes that he's conduit as much as creator for that change. And in spite of - or, perhaps, because of - the demands and pressures of the life he's chosen, and the position of leadership he's earned through a decade of determination, William Clark Green is a guy who takes none of this for granted. "Our path is guided by something that's greater than me, I believe that. We can be very proud of what we've accomplished; we've done it the right way...I feel very proud of what we've done, and I'm thankful every day for where we're at." - Chris Mosser

There's an old adage in the music business—hurry up and wait. It’s as old as time itself and still rings true today. All too often, we’re stuck in a no man’s land where the present is almost non-existent. You look at the past, the “good old days,” with rose-colored glasses. The future is presented as when everything will be figured out and make sense—there’s an unparalleled optimism towards the future. Days drag on, but the years fly by.

With their highly anticipated sophomore album, Homeland Insecurity, Texas’ Flatland Cavalry wants to stop and smell the roses. Bandleader and chief lyricist Cleto Cordero is fine with examining and the present. There’s an appreciation for all the sharp detail and high-spirited emotions of today.

Flatland Cavalry—the aforementioned Cordero, guitarist Reid Dillon, bassist Jonathan Saenz, drummer Jason Albers, and newest member, fiddle player Wesley Hall—has been stretching their legs across the country this past year after honing their craft and voice in the music boomtown of Lubbock, Texas.

Homeland Insecurity finds Flatland further evolving as musicians and storytellers. They continue to expand their sonic palettes while remaining true to those defining characteristics that made them rising standouts years ago.

On their previous releases, Come May and Humble Folks, Cordero and company harnessed untethered emotions, feel-good rhythms, and simple raw energy to make it into the hearts of fans and critics. There was power in Cordero’s proverbial pen that resonated with the highs and lows of college life.

“We’re all just out of college,” says Cordero. “We’re in our mid-twenties. We’re all told growing up that by the time you’re out of school, you’ll have it all figured out, but that’s not really how it is. You’re still out there trying to find yourself.”

By no means does Cordero and company feel they have it figured out, but rather, are trying to figure it out themselves as well.

“I think at some point, you feel like you need to grow-up, but you don’t know how,” says Cordero. “You’re searching for that path though. You’re overturning every rock trying to find the secret that gets on to the next. I’m not trying to be a teacher or anything. I just wish someone would have told me earlier on and saved me the heartache of it all.”

Flatland is unabashed in this search knowing that they’ve always wanted to be band where their crowd grew along with them. Cordero knows he could have just revisited old themes, young lust narratives, and drinking days glory for another album. He could have easily rehashed old ideas and gotten a pass for them as long as they were catchy, but he wouldn’t have been able to live with himself.

There’s an uneasiness in his voice when even broaching the subject of cookie-cutter songs. You can hear him loosening a tie around his neck that isn’t there.

Homeland Insecurity sees Cordero sanding and smoothing the edges as a lyricist and storyteller. He’s always had an ear for memorable melodies and a gift at finding the heart of the story. But here, he expands and challenges himself to not only write at a deeper thematic level, but to simply become a better songwriter.

“Everything I’d written before, it was always just something I had to get out. It was always spurred on by an emotion, but that doesn’t mean the lyrical side was rich,” says Cordero. “I have to really say something. Everything has to purposeful. I can’t get stuck.”

Indeed. Flatland Cavalry isn’t stuck in a rut. Despite embracing the harsh realities of modern civilization and the anxieties of life, Flatland carves out their own path on Homeland Insecurity.

Born in Oklahoma, raised in the small East Texas town of Flint, and a wanderer ever since, Kenny Freeman’s music is a distinct mixture of his life so far. Sounds of Texas Blues & Americana mix with a soulful voice sharing personal stories of heartache and hard times. All of this coming together to take a look at a life on the road less traveled, and providing a glimpse into the heart of a hard worn traveler.

A third generation musician, Kenny was constantly surrounded by jam sessions comprised of his father, uncle and their friends. He would wait patiently, sitting in the corner listening, until it was his turn to step forward and play whatever instrument was available. At a young age he found Eric Clapton and Stevie Ray Vaughan, which led him on a never ending journey into the depths of blues history. Mix that in with a love for songwriters like Townes Van Zandt, Ray Wylie Hubbard, and Lyle Lovett, what is conjured is a unique mix that elicits thoughts of the past and a hard traveled road ahead.

After five years in Nashville touring extensively both as an acoustic act and with his full band, The Smokey Gringos, it was time for a change. This ‘change’ led to 15 months spent in Korea and Southeast Asia playing music, teaching English, and exploring the world.

Upon returning stateside, Kenny settled down a little closer to home this time, Austin Texas. After three years in Austin things got a bit restless and it was time to hit the road again.

With the turning of 2019 began a year long RV tour up to Alaska and back, playing shows all along the way.