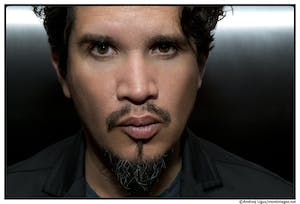 GARZA is a collaborative musical experience conjured up by Rob Garza, one-half of the pioneering electronic outfit, Thievery Corporation. His new project is a deep reimagining of a process that features a collective of artists, musicians, producers, visual artists and videographers. With multidimensional music and a convergence of genres; it blends, merges and melds together into one singular experience.

GARZA explores a different musical palette of colors and textures than Rob Garza’s previous work…at times blurring the lines between ‘pop’ familiarity and electronic esoterica. After twenty years of Thievery Corporation, GARZA is redrawing his musical boundaries and stretching into areas with a newfound freedom that feels deep and open all at once, yet is undeniable in its accessibility.

In 2020, GARZA will hit the road with a live band of instrumentalists and vocalists, playing in venues and festivals worldwide.

“I’m really excited to be taking this new project on the road to debut the music of GARZA,” said Rob Garza. “We’ll be featuring the vocals of some amazing singers and a new musical ensemble too. With Thievery Corporation not touring in 2020, I’m wholly inspired to perform these new songs with a mix of electronic and live instrumentation, blurring the boundaries of more modern, different genres. And expect to hear a few Thievery standards as well.”

With the release of albums like Welcome to Soul City, Easy Magic, Flowers & Chocolate, and Live on the Mothership (not to mention lost EPisodes) the Secret B-Sides consistently create plush musical escapes.

Whether performing live as a trio, or accompanied by any number of collaborators, this band is on the planet to help Earthly beings get together for funky good times. In other words, the Secret B-Sides are all about flying saucers, dinosaurs, and love.

Since conception, the B-Sides have opened in direct support for Lee Fields & the Expressions, Soulive, +he Foreign Exchange, Karl Denson’s Tiny Universe, Ibeyi, Talib Kweli, Dead Prez, Dwele, 9th Wonder, and many more, including a very special performance as the backing band for Gift of Gab, from Blackalicious.