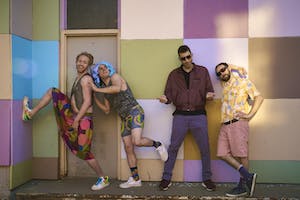 Philadelphia’s funktronica powerhouse, Tweed, is filling dance floors with their high-energy fusion of funk, rock, and electronica. Just as their namesake fabric of mingling colors and textures, Tweed has interwoven a psychedelic web of composition and improvisation. Their collaboration can take listeners from multi-layered visions through the psyche to sweaty, raging disco dance parties driven by their own incessant beat.

The band was formed in 2010 in the basement parties and college underground at University of Delaware. In 2013, Joe, Jon, and AJ added Dan on bass and soon after took the national stage of clubs and venues across the country. With relentless style and a uniquely cohesive sound, they have proven they can bring the party anywhere they go.

“A high level of energy dominates [The Chunky Life] with plenty of variation. The band comes together for tight comprehensive jams with funky transitions that cross boundaries.” – LiveForLiveMusic.com

“There will be a lot more great music at Great Outdoors Jam before it closes at sunset Sunday, but I guarantee you there won’t be a set better than the one Tweed played. This Philadelphia quartet was over-the-top astounding: jamtronic fusion heaven.” – Music Fest News

In Flight has an eclectic sound that is unique to each performance. The band takes form as an acoustic guitar and piano duo or as an electric trio with drums. In either form, you can expect to hear original compositions that are worldly, progressive, and infused with experimental improvisations.

The band has roots as Hoosiers but now resides in Asheville, North Carolina. For nearly a decade, keyboardist, Ian Taylor, and guitarist, Bryce Robertson, have formed an alliance of music and friendship. With the addition of Jay Good on drums, the sound continues to grow.

ElectroChemical is unhinged psychedelic progtronica music spawned from the inner minds of William Davis (bass, production) and Wayne Redden (drums). Soup Williamson (Life is Art Studios), an integral new addition to the band, is offering unparalleled visual graphics directly on stage as the third member of this fast rising group.