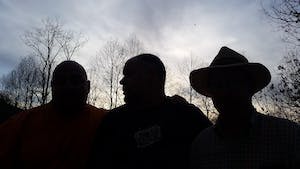 iCal
Google
The Midnight Aces have been purveyors of the blues in Asheville NC for decades, and they'll finally make their Grey Eagle debut on 12/12!

REMEMBERING ROOTS WITH BRIAN "THE MUG" MILSTEAD AND THE MIDNIGHT ACES

Why the blues, and why in Asheville?

I’ve lived here for 48 years, so I’m definitely what you would call a native. It’s a great place for musicians to live and express themselves, and we’re the only ones really playing this kind of music in Asheville. There isn’t much of a Blues music scene in town- at least not the kind of Blues we play, so we feel we’re offering something unique.

How did you get started?

We’ve all known each other since high school, so it’s been a while. We were mentored by Asheville Bluesman “Loose Bruce” Horton who started the Midnight Aces. Sean Moore and Zeb Fuller were his rhythm section in ’89, but they left before I joined in ’90 so we never got to play as a unit. As fate would have it, we met up in 2009 at a mutual friend’s house who was trying to put a band together. That’s when we started playing in the current lineup. It just seems to work, and we play well as a group. I like to compare it to an athlete passing a ball to a teammate effortlessly… a no-look pass. It’s almost without thought.

What are some of the staples of your setlist?

We mix things up and play a variety of songs from different artists. Muddy Waters, John Lee Hooker, Albert King… The set list can be pretty diverse. There’s a scene that comes with the blues… That image of the old juke joints, playing shows until two in the morning and going to have some late night drinks afterward. I really like that idea, and there’s definitely an audience for it.

What effect does playing the music you love have on your life?

It serves the soul. It’s definitely therapeutic. We all have day jobs, so we’re not in this to make it big. I’ve been in the printing business for 30 years, and getting paid to play music in Asheville isn’t always easy. A lot of artists will tell you that it’s getting more and more difficult, but this is what we love to do, and we really get a kick out of showing the people that come to see us a good time. If you can touch the folks in the audience… Help them forget about their problems and make them smile… that means a lot to us. We open every show with “Let the good times roll!” It gets the audience excited. It’s hard work, but it’s fun, and if they want to see us play, I’ll continue to go out and perform. When the interest from the audience ceases to exist, I guess I’ll just become a guitar collector.

Given the opportunity, would you consider playing music full-time?

I definitely would. That was something I realized very early… I was offered an opportunity once, but it’s just too unpredictable. To be able to pay all of your bills on time and have decent insurance… Those things are very important. We all have responsibilities outside of playing music, so we need something more stable. You have to be happy with what you’ve got, and we’re just happy to be able to play together.