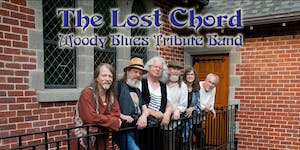 iCal
Google
The Lost Chord brings the dense and mesmerizing catalog of The Moody Blues back to The Grey Eagle stage in Asheville NC on March 5th.

The Lost Chord is an Asheville-based Moody Blues tribute band that was formed in 2016. Their goal is to reproduce the classic, cosmic sound of the legendary band’s original studio recordings in a live setting. The focus of their repertoire is on the seven albums of the Moodies’ classic period, spanning from Days of Future Passed to Seventh Sojourn. They cover most of the well known hits as well as some of the more obscure gems from that era.

The band features founding member, Garry Byrne, on keyboard sounds, which includes digital samples of Mike Pinder’s Mellotron, an instrument that was a major characteristic part of The Moody Blues’ sound. On lead vocals, backing vocals and electric bass is Sherman Hoover, who also performs with The Billy Jonas Band and has been playing at Jubilee Community services for many years.