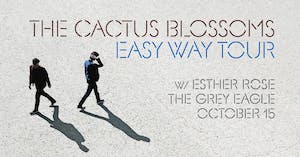 iCal
Google
Don't miss The Cactus Blossoms with Esther Rose at The Grey Eagle in Asheville, NC on October 15. It's an ALL AGES show at 8pm.

Blood Harmony. Whether it’s The Beach Boys, Bee Gees or First Aid Kit, that sibling vocal blend is the secret sauce in some of the most spine-tingling moments in popular music. The Cactus Blossoms – Minneapolis-based brothers Page Burkum and Jack Torrey – offer compelling evidence that this tradition is alive and well, with a deceptively unadorned musical approach that offers “creative turns of phrase, gorgeous harmonies, and an ageless sound” (NPR All Things Considered), not to mention spine tingles aplenty. Their 2016 debut You’re Dreaming, a stunning and transporting collection of original songs, earned high praise from Rolling Stone and Vice Noisey, tour stints with Kacey Musgraves and Lucius, and a perfectly cast performance on the third season of David Lynch’s Twin Peaks. Now their unlikely rise continues with new album Easy Way, to be released on their own label Walkie Talkie Records.

While many bands would have been content to stick with the winning formula of their debut, the Blossoms refused to repeat themselves. If You’re Dreaming celebrated their vintage country and rock influences, Easy Way reveals a songwriting style that has changed, evolved, and gotten more modern. Dan Auerbach, another artist who knows from bedrock influences, co-wrote two songs on the album. “Dan’s love for songwriting was inspiring, just the kick in the pants we needed to start writing again after being on the road,” says Page.

The brothers’ decision to produce the new album themselves no doubt led to the new sound. “We wanted the freedom to experiment with our own weird ideas,” says Jack, “We used to joke that the working title album should be Expensive Demos.” As they crisscrossed the nation on tour, the brothers would stop through Alex Hall’s Reliable Recorders studio in Chicago to chase the new sound they were after. The result joins together what would otherwise be distant corners of the American songbook. Both the traditional twang of Chicago pedal steel guitarist Joel Paterson (Devil in a Woodpile, The Western Elstons) and the primal wail of free jazz saxophonist Michael Lewis (Bon Iver, Andrew Bird) are at home on the album. Just as they did with their debut, the brothers found a voice all their own.

“I’m always changing,” Esther Rose sings at the top of her sophomore album, ‘You Made It This Far.’ The line is at once a promise and a plea, a concise distillation of her commitment to evolution as well as her dogged determination to meet every challenge in her path with unconditional acceptance. Laid-back yet deliberate, her delivery here marries old-school country and rural folk with a plainspoken philosophy that’s thoroughly modern, and the end result is a record that’s as joyful as it is restless, one that weaves fiddle and lap steel around profound revelations, late night conversations, and all the moments in between.

“There’s this theme of radical acceptance running through the whole album,” Rose explains. “I didn’t realize it until after I’d finished writing the songs, but they all came from this place of trying to understand and truly accept myself and others in our most vulnerable moments of confusion or despair.”

A New Orleanian for the last decade, Rose first gained national prominence with the release of 2017’s ‘This Time Last Night,’ an intoxicating debut that prompted Fader to praise her “honest, gorgeous country songs” and rave that “her voice has a pitched-up June Carter quality, her melodies are simple like Jimmie Rodgers’s, and her tone is reminiscent of bluesy, lovelorn greats like Rex Griffin and Patsy Cline.” The record earned Rose festival performances from Savannah Stopover to AmericanaFest alongside dates with The Punch Brothers, Pokey Lafarge, and The Deslondes, and it even caught the ear of fellow Detroit native Jack White, who was so taken with the music that he invited Rose to duet with him on his ‘Boarding House Reach’ album.

“Recording with Jack was a really great fit because he likes everything to be a little messy and a little improvised and a little raw,” says Rose, who would go on to share the stage with White at Jazz Fest. “That’s exactly how I like to work, too.”

Rose’s journey from Michigan to Louisiana was nothing if not a little improvised. Though she grew up adoring musicals and singing three-part harmonies with her sisters, she never considered music to be a serious career option, instead spending her early 20’s letting the current carry her from town to town and job to job.

“I was just floating around kind of aimlessly,” she reflects. “I moved to Vermont for a while, and then I came back to Michigan and lived in Flint and Ann Arbor, where I would waitress during the day and stay up all night writing songs in my bedroom. I met a guy who lived in New Orleans and it sounded like fun, so I moved down there.”

While the relationship ultimately didn’t last, Rose’s connection with the city did, and for the first time in her adult life, she began planting roots.

“I found what I always needed in New Orleans,” she says. “The slow pace, the low buildings, the walkable neighborhoods, the weekly music events. I was always searching for a place like this.”

Embracing the local spirit, she found work singing traditional jazz and blues tunes, channeling Memphis Minnie and Ida Cox as she performed in the bars and clubs lining Frenchmen Street. As much as she loved that music, though, Rose never really saw herself as an interpreter of song.

“The original recorded versions of those old blues songs were so beautiful and perfect that I never felt any accomplishment in singing them myself,” she explains. “I was writing my own songs at the time, but they always got swept under the rug for being a little too different or a little too weird. I was lonely for a community until I discovered the folk scene and met all these other artists writing and singing their own music.”

Rose was itching to dive in headfirst, but there was a problem: she didn’t know how to play guitar. Up to that point, she’d primarily been an accompanist, singing other people’s songs and playing percussion in other people’s bands.

“It was daunting to pick up a guitar for the first time at 27,” Rose reflects, “but something switched inside of me and I began to feel this vast, unlimited potential that made me question everything and wonder what was possible. I devoted every spare minute to figuring out the guitar, and I loved the sense of discovery that came with learning how to play all these songs I’d written through the years.”

While writing the songs that would become ‘You Made It This Far,’ Rose found herself working through a period of tumultuous change, grappling with a breakup, a move, and a family illness all at once. Splitting her time between New Mexico and New Orleans, she pondered what it takes to love and to be loved, to be vulnerable enough to let someone in and brave enough to face the pain when they’re gone. When it was time to record, she teamed up with the analog gurus at Mashed Potato Records in New Orleans and cut the entire album live to tape in just four days.

“The record starts and ends solo acoustic,” Rose explains, “but in between those moments, it’s me and the band. I used to feel a lot of anxiety about opening up and expressing myself, but my band really helped me find my voice.”

Throughout the record, Rose’s voice shines on playful, seesawing melodies, channeling the idiosyncratic twists and turns of Joni Mitchell on tunes like the infectious “Only Loving You” and tapping into loping delivery of Hank Williams on tracks like the timeless “Rio En Medio.” “Handyman” is a question of a song that finds Rose yearning for a fresh start, while “Don’t Blame It On The Moon” (written just days before the final recording session) searches for clarity within the free-fall of a disintegrating relationship, and “Always Changing” is an ode to empathy.

“I wrote that song as a reminder to myself,” she explains. “It’s about treating yourself and those around you with kindness, looking for the best version of yourself, and striving to always do a little better next time.

Rose tackles nostalgia and regret on “Three,” grappling with her parents’ decision to sell the family farm while she remained a city-dweller in New Orleans, and sinks into the icy Michigan winter on “Five Minute Drive,” harkening back to morning drives with her sister as a teenager, when the days seemed to last forever and she could barely wait to get out into the world on her own.

“Those are both memory songs,” Rose explains. “I think of songwriting as time travel, and writing those tunes was a way for me to visit places and moments that are long gone and to keep track of everything that’s happened to me over the years.”

While Michigan turns up throughout the record, New Orleans and New Mexico are Rose’s most frequent settings, serving as both literal and metaphorical backdrops as she seeks balance between the wild and isolated natural beauty of the southwest and the romance and electricity of city life. “Lower 9 Valentine,” for instance, plays out more like a love song to a neighborhood than a person, and the sultry “Sex and Magic” gives voice to lust and desire in a way that would have seemed impossible to Rose before she landed in New Orleans.

Perhaps, ultimately, that freedom helps explain why Rose became a songwriter in the first place. With a guitar in hand, she’s free to say the things she’s always felt but never known how to express, free to access the feelings and thoughts and memories that might otherwise be out of reach, free to, quite simply, be herself. “Can’t you feel me changing?” Rose sings on the album. The answer is a resounding yes.