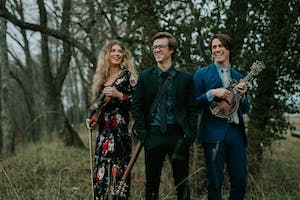 The Arcadian Wild began in the fall of 2013 when a few choir students from Lipscomb University in Nashville, TN met up after class to jam for the afternoon. Years later, the band now consists of guitarist Isaac Horn, mandolinist Lincoln Mick, and fiddler Paige Park. Currently, the folk group is touring off the anticipation and successful release of their sophomore record, “Finch in the Pantry” (May 2019, Antifragile Music), which debuted at #9 on the Billboard bluegrass charts. With roots running deep in formal vocal music, and influenced by progressive bluegrass and folk artists, The Arcadian Wild explores a unique acoustic sound that is simultaneously unified and diverse, offering up songs of invitation; calls to come and see, to find refuge and rest, or to journey and wonder.

Anna Lynch is a native Californian, born and raised in the small wine country town of Sebastopol, California, and now residing in a small town on the outskirts of Asheville, North Carolina. Her musical underpinnings were formed by her parents in the California bay area folk scene and honed in the back-country of Alaska where she earned her first accolades as a band leader and songwriter.

Her self-titled debut album, released in 2013 to critical acclaim, was heralded as “one of my favorite albums”, “something real that you can endlessly fall into love with”, “a compelling honesty to the writing and a clear truth to the delivery of every single line”, “a true recording artist”, and Country Music Television (CMT Edge) profiled her song Railroad Man from the release (available for preview on her website).

Her songs speak to all-audiences because everyone can relate to the stories and the way they are told. Anna has lived a lot in her time and her songs tell of that life. It’s relatable, honest, and above all else it’s real and her fans know it. When she sings, you believe what she has to say. Why? Because every letter of every word of every line has been lived by her inch to feet and yard to mile.