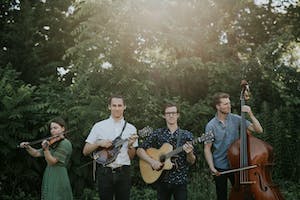 Led by songwriters Isaac Horn (guitar) and Lincoln Mick (mandolin), and with the support of other gifted musicians, The Arcadian Wild confidently inhabits and explores an intersection of genre, blending the traditional with the contemporary in order to create a unique acoustic sound that is simultaneously unified and diverse. With one foot planted firmly in choral and formal vocal music, and the other in progressive folk and bluegrass, the band offers up songs of invitation: calls to come and see, to find refuge and rest, or to journey and wonder. In May 2019, The Arcadian Wild released their sophomore record, “Finch in the Pantry” (May 2019), which debuted at #9 on the Billboard bluegrass charts.

With roots running deep in formal vocal music, and influenced by progressive bluegrass and folk artists, The Arcadian Wild explores a unique acoustic sound that is simultaneously unified and diverse, offering up songs of invitation; calls to come and see, to find refuge and rest, or to journey and wonder.

Over the course of several months in 2020, The Arcadian Wild will release Principium, a four-movement song-cycle that explores human relationship, flourishing, degradation, and redemption. To help tell this story, the band has collaborated with filmmaker Greyson Welch to create a series of short films to accompany this unique project. The first movement, “Spring:Wake” was released in July 2020, with the second movement “Summer:Walk” to follow in September 2020.

Christian Lopez (born August 1, 1995) is an American singer-songwriter and multi-instrumentalist from Martinsburg, West Virginia. His mother, a music teacher, steeped him in piano at age of 5 and guitar soon after. He began songwriting in his early teenage years and in 2014, Lopez signed his first record deal with Blaster Records. At 18, he recorded his first EP,”Pilot”, followed by his debut full length album, “Onward” in 2015, both produced by Grammy Winning producer, Dave Cobb. (Chris Stapleton, Jason Isbell, Sturgill Simpson, Brandi Carlile)

Known for his love of the stage, Lopez and his band toured relentlessly, headlining their own shows and stepping out to perform alongside national & legendary acts. Then in September, 2017, Lopez released his 2nd full length album entitled, Red Arrow, this time with producer Marshall Altman. The Album features include Vince Gill (“Still On It’s Feet) and The Milk Carton Kids’ Kenneth Pattengale (“Caramel”), recorded at Nashville’s BlackBird Studios. Rolling Stone says, “Lopez could connect the dots for many young listeners.”

Now at 25 years old, Christian is preparing for the release of his 3rd full length album, “The Other Side”, out March 5th, 2021. (Produced by Robert Adam Stevenson). Over the course of the COVID-19 Pandemic, Lopez released a slew of songs off his upcoming record, engaging his fans with elaborate videos for each. Listen & watch his single release “I Don’t Mind”, available now.