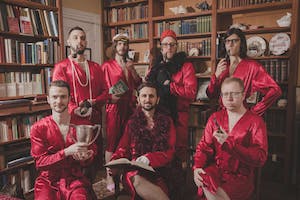 As lead singer of Thank You Scientist, Salvatore Marrano knew from an early age that he wanted to rock. He was also aware that it was a long way to the top if, in fact, he decided to do so. He continues his ascent to this day. Thank you for your cooperation.

“Human man does a strum. He has knob on guitar that adjusts volume” -Premier Guitar Magazine

“I am Cody McCorry, and I live in Cream Forest, New Jersey. I am an experimental adult man, but still play nostalgic jazz and always remember Ryan Thompson’s little pet creatures. I also enjoy theremin, hand saw and long walks on a cold beach.”

“My name is Joe Fadem. I started playing music when I was 6 years old and took classical djembe lessons. I met Thank You Scientist when I was on tour as the bassist in the Sugar Ray.”

Ben Karas is a violinist with classical training whose drive as a musician has been fueled by his passion for literal salt. He knows exactly how much is needed to “bring it to life” He marched with Ghandi in 1930 and is the reason we still have salt readily available to this day.

“Sam was a classical harmonica player since the age of 10. When Tom called one day and asked him to join Thank You Scientist on harmonica, he told Tom "I think I’d be a better fit on saxophone." Tom agreed, so Sam went ahead and learned saxophone to play in the band. It was a slow process and the band was very frustrated with his terrible playing at first, but this just motivated him to get better. It was only recently he felt truly good enough to be apart of such a creamy group of musicians.”