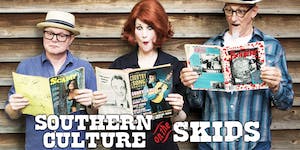 POSTPONED: Southern Culture on the Skids

iCal
Google
We love them so much we consider them family around here. Southern Culture on the Skids return to The Grey Eagle in Asheville NC on 9/11/20.

This show, originally scheduled for 3/21, has been postponed until 9/11. Current tickets will be honored on the new date, but if you are now unable to attend please email info@thegreyeagle.com for a 100% refund. A note from the band below.

“Hey folks, we are really sorry to announce that we are going to have to cancel the upcoming shows through April. One of the band members unexpectedly has to have surgery and recovery is gonna be 6 to 8 weeks. Sorry for the inconvenience but we’ll make up the show at The Grey Eagle on Friday September 11.”

SOUTHERN CULTURE ON THE SKIDS

Southern Culture On The Skids has been consistently recording and touring around the world since its inception in 1983, when Rick Miller was a grad student at UNC-Chapel Hill. The current lineup (Dave Hartman – drums; Mary Huff – bass and vocals; Rick Miller – guitar and vocals) has been playing together for over 30 years. The band’s musical journey has taken them from all-night NC house parties to late night network talk shows, and from performing at the base of Mt. Fuji in Japan to rockin’ out for the inmates at NC Correctional Facilities. Their music has been featured in movies and TV, and used to sell everything from diamonds to pork sausage, and their legendary live shows are a testament to the therapeutic powers of foot-stomping, butt-shaking rock and roll.

SCOTS’ DIY roots go all the way back to the days of making cassette demos in the dirt floor basement of the original band house. “It was a beat down house we found in the woods, covered in kudzu vines”, Rick recalls. “We hunkered down there and came up with the sound and ideas we’ve been refining and tweaking ever since; a blue plate special of musical genres, all mixed together to give up new flavors and combinations.”

Bootleggers Choice, released in September 2018, is the latest album from Southern Culture On The Skids. The album features 16 all-new recordings of the most requested songs from the band’s long out-of-print major label releases, Dirt Track Date (1995) and Plastic Seat Sweat (1997), plus a re-mastered edition of the original 1991 recording of “Camel Walk” from the Santo Sings EP. These 16 new recordings were tracked and mixed by Rick Miller and the original engineer/producer of Dirt Track Date and Plastic Seat Sweat, the one and only Mark Williams, at Rick’s rural NC studio (and SCOTS clubhouse) "The Kudzu Ranch". CD, Double LP and digital available for order now at the official SCOTS store.

The band’s philosophy and originality has been a big factor in their longevity and success. Now, with their own studio and label, they continue to create new music and update their extensive catalog with refreshing new recordings of their most popular songs. “The songs in this collection have held up for 20+ years,” Miller says, “and we thought they deserved a new take—you know, updated for the new millennium. We have a lot of people still discovering who we are in 2018, and I think this record will appeal to new fans and old fans alike ‘cause it rocks!”

Over the last ten years, Pierce Edens has been drawing on his Appalachian songwriting roots and blending them with the grungy rock and roll sounds that took him in his teenage years. The result is a haunting and fiery mixture that is notoriously hard to pin down. Allmusic.com classifies Edens as both “Folk-Rock” and “psychedelic-grunge,” and No Depression writer Bill Kopp says “[He] could just as easily- and accurately- be tagged with the singer/songwriter label; He’s a gritty troubadour who takes what he needs from each style, blending and bending it to suit the needs of his songs.” Or, as Fred Mills state in Blurt Magazine, “Somewhere up there in the hills of western North Carolina a lot of bodies are buried, and Pierce Edens is the man with the locations. There’s no evidence that a cop, D.A. or judge can bring forth, mind you, but he clearly knows something; you can hear it in his twisted, tortured vocal bray […] a soulful-yet-serrated instrument that conveys far more than even its owner might intend.” Now, in his fifth fully independent album (Stripped Down Gussied Up), Edens has taken his singular voice back home to his studio in Western North Carolina to bury some more bodies. This album witnesses Edens stripping down the instrumentation to simply the vocals, percussion, and guitar, alongside his long time band-mate Kevin Reese accompanying with lead guitar, mandolin, and occasional banjo for a handful of genre-bending songs. Stripped Down Gussied Up delivers Edens’ signature sound as it should be heard; intimate and atmospheric, glittery, gritty, and raw.