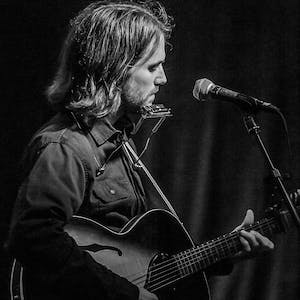 Boone, North Carolina based songwriter and musician, Shay Martin Lovette has been honing his craft on tour across the southeast and beyond in support of his latest album 'Swifter Drifter', since its release in the summer of 2018. With this impressive solo effort we get a glimpse of Lovette's life and those that have connected with him. Each song full of joy, pain, yearning, triumph, and heartbreak—a relatable swath of emotional experiences that ties his sound to the listener. His music has also started to drift overseas where the Berlin, Germany based new folk music curator and playlister, Songpickr referred to Lovette as an "undiscovered jewel" and selected 'Swift Drifter' as one of the top albums of 2018. Public radio powerhouse, WNCW also ranked 'Swift Drifter in their top 100 albums of 2018 as voted by their listeners. Lovette has performed at nationally renowned festivals like Merlefest and Bristol Rhythm and Roots Reunion in the past and recently began working on a new album at the Rubber Room Recording Studio in Chapel Hill, NC with Joseph Terrell of the band Mipso at the helm as producer. The forthcoming album will feature musicians Andrew Marlin(Mandolin Orange) and Libby Rodenbough (Mipso).

"The album’s ambitious twang, its rich, timeless lyricism, and sprawling warm textures streamline Lovette to a rightful roost alongside many of his veteran songwriter heroes." - New Commute

Life can be a confusing muddle of risks and uncertainties. As a high school kid experimenting with music for the first time, Clint Roberts looked to make some sense out of the chaos. Penning his first original song was all it took for Clint to get hooked, and soon he was writing songs and playing shows around North Carolina with his newfound friends in the folk and Americana music scene. Now, as a singer-songwriter living in Nashville, TN, Clint draws on the Southern music traditions of gospel, blues, and country to sing his songs of heart- break, doubt, mental illness, and questions of meaning.

Clint was raised in Brevard, North Carolina, a small Appalachian town southwest of Asheville by the Pisgah Forest. Music-making started as more of an emotional outlet than any desire for a career path. High school friend Barrett Davis taught Clint the basics of several different stringed instruments and co-wrote some of Clint’s first songs with him. Inspired by the rugged and rootsy sounds of early Avett Brothers records, Clint was writing songs by himself soon, refining his personal style with influence from Jason Isbell, The Wood Brothers, and Sturgill Simpson.

After graduating from high school, Clint spent some time in college at Appalachian State University in nearby Boone. His time in school was largely spent driving between Boone, Brevard, and Asheville playing shows and recording the songs he had written as a teenager. These recordings resulted in his debut EP, Where the Heart Is, a collection of six songs that explore heartbreak, mental illness, and existentialism through fictional narratives. Marked by dramatic lyrics, sweet melodies, and the use of traditional folk instruments, Clint released Where the Heart Is independently in 2015 to acclaim from his growing fan base.

A Southeastern tour followed the release of Where the Heart Is, and Clint made time along the way to write new music. By the time he had returned from tour he had enough material to begin recording again, and by the summer of 2017 production for the new record, Hamlet Blues, was finished. With a new record in tow, Clint moved to Nashville, TN at the beginning of spring 2017. Hamlet Blues is available wherever you get your music.