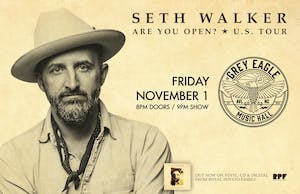 “Are You Open?” Seth Walker sings on his transfixing new album of the same title. More than just a question, it’s a challenge, an invitation, a dare. “To me, being open means being vulnerable and exposed,” explains Walker, “but that’s where the little nuggets of creative gold come from. I never planned an overall concept for this record, but each of these songs seemed to spin out from asking myself that one simple question.”

Produced by The Wood Brothers' Jano Rix, ‘Are You Open’ marks Seth Walker's tenth studio recording, and the music is undoubtedly his most inventive, exploring new sounds and textures as he examines what it means to truly be open, both as an artist and more broadly as a human in today's increasingly more complicated world. The songwriting here is bold and infectious, featuring melodies and rhythms drawn from Walker’s time spent in Havana and filtered through his split-screen life in New Orleans and Nashville. The result is a melting pot of sounds and perspectives, a soulful brew of roots music from the Americas and beyond. Songs frequently build off of a single chord, shifting in color and tone as they ebb and flow and stack layer upon layer over hypnotic bass lines and percussion grooves. The record features Walker’s guitar playing more heavily than ever before, and the new approach suits him well, showcasing a melodic prowess to match his prodigious lyrical gifts.

‘Are You Open?’ follows 2016’s critically acclaimed ‘Gotta Get Back,’ a stunning collection that found Walker excavating the roots of his love affair with music by reuniting the family that first sparked his fire as a child. That album traced its origins back to Walker’s native North Carolina, where he grew up on a multi-family commune and studied classical violin and cello before ultimately discovering his passion for soul, jazz, blues, and folk. He’d go on to deftly mix all those genres and more in his work as a solo artist, organically building up a celebrated two-decade career that’s earned him praise everywhere from The Washington Post to NPR, who hailed his "hard-driving" songs and "sweet tenor," in addition to landing him dates with The Mavericks, The Wood Brothers, Raul Malo, Paul Thorn and Ruthie Foster, among others.

What People Are Saying…

“…an accomplished guitarist and an even better singer, distilling the soul of Ray Charles, the Southern boy roots charm of Delbert McClinton, and an uptown blues turn of phrase (à la Percy Mayfield) into his own distinct voice.” – The Vinyl District

"Walker's brilliantly nuanced vocals are as natural, clear, sharp, and as effortlessly elegant as his guitar playing..." - All Music

"It’s a welcome thing that Seth Walker’s chosen to pitch his tent in Americana...Walker has a way with smooth and swinging phrasing and makes classically accessible up-front pleas." - Nashville Scene

“If you subscribe to the Big Tent theory of Americana, then Seth Walker –with his blend of blues, gospel, pop, R&B, rock, and a dash country—just might be your poster boy.” - Country Standard Time

“…pure talent, a masterful blues guitarist, a singer with some swing in his voice and a writer whose [songs] sound less composed than unleashed.” - Austin American Statesman

Kellin Watson is an internationally-touring singer-songwriter, whose award-winning sound blends elements of blues, pop, folk, and soul. Hailing from Asheville NC, Kellin draws on her Appalachian roots to bring both power and rawness to her music. Performing and writing songs from the age of 13, Kellin gained the fortuitous blessing of being able to grow into her artistry independently and w/ instinctive ease. By the age of 21, Kellin decided it was time to become more proactive, and focus on her music professionally full time. Proving to be the right choice, Kellin went on to release 4 solo independent albums, all of which have been well received nationally & internationally as well. Throughout her journey, Kellin has been able to perform with or open for a wide range of notable artists such as, Amos Lee, Little Feat, Susan Tedeschi, The Duhks, Jessica Simpson, Sara Evans, Nitty Gritty Dirt Band, Walter Wolfman Washington, Gordie Sampson, Oliver Wood, Billy Corgan, The Crash Test Dummies, and many others.

Making her national television debut as a featured performer on CMT (CMT's Big Break), Kellin was selected out of several Western North Carolina performers by the Award-winning Country Artist, Sara Evans. In continuing to cultivate her efforts in the industry focusing on tv and film, Kellin's music has been featured on CBS's The Good Wife, Degrassi: The Next Generation, & GMC's Trinity Goodheart, as well as various other notable global commercial ads.

Kellin's most recent release, Halo Of Blue is a simple, honest and stripped down recording with echoes of some of her strongest influences: Sam Cooke, Otis Redding, and Nina Simone. A lo-fi approach to a hi-fi artist, brings a special focus to the craftsmanship and depth of each song on Halo Of Blue. Sarah Hinson of WNC Magazine said "Halo of Blue stands like a tree on a mountainside, its roots firmly planted in Appalachian influence while its branches reach out to elements of blues, pop, and folk. The variation within Watson’s work highlights her multifarious talents while remaining consistent and approachable." With the release of Halo Of Blue, Kellin has found a deeper connection to her roots, giving her more strength to stretch her wings as an artist, and fly. Politely pouring her heart out on stage, Kellin often captures her audiences by surprise, and leaves them wanting more. Craig Havighurst of Music City Roots said after seeing Kellin live, "I had a long interview with the delightful Kellin Watson before the show, and on stage she was shockingly good. Not the singer you might imagine from Asheville central casting, she took on the soul chanteuse role with force and tone. " Most recently, her tune entitled, Swagger off of her current release was acknowledged with the honor of 1st runner up in the R&B Category for the prestigious John Lennon Songwriting Contest (Session II).

Throughout her career, Kellin has toured nationally and internationally playing some of the most respected venues, festivals, events and College's in the US and Canada including, Music City Roots @ The Loveless Cafe in Nashville TN, Stan Rogers Folk Festival in Canso Nova Scotia, Bristol Rhythm and Roots Festival in Bristol Tn, Hotel Cafe in Los Angeles CA, the Alltel Pavilion in Raleigh NC, Bele Chere Music Festival in Asheville NC, 30A Songwriters Festival in Santa Rosa Beach FL, the Fletcher Opera Theatre in Raleigh NC and many more.