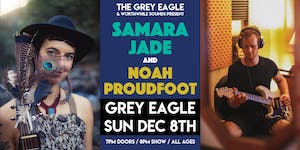 iCal
Google
Samara Jade returns to her old stomping grounds of Asheville NC for an ALL AGES show at The Grey Eagle with Noah Proudfoot on December 8th!

Samara Jade is a modern folk troubadour - a writer, performer and leader of songs who stitches together a unique genre-bending tapestry of sounds and stories. With skillfully innovative guitar playing, an acrobatically emotive voice, and a knack for clever and piercingly truthful lyrics, Samara’s songs stimulate minds, open hearts, empty tear-ducts and perhaps best fall into the nutshell of a fan-coined genre: "Philosopholk."

Originally from the Hudson Valley of New York, Samara moved to and called the Appalachian mountains of North Carolina home for many years, before moving into her van and migrating to the west coast for more continual touring. The music of all of those landscapes and cultures has seeped its way into her sound and conscience. Inspired deeply by the brave spelunking into the depths of the human psyche and listening sharply to and appreciating the wonders of the natural world, Samara is grateful to have songwriting as a tool of digesting the world and making medicine for the times we are in.

Thanks to the neural networks of community singing and song sharing, and also to signing her latest album “Wave of Birdsong” - a fully orchestrated folk epic and ode to the birds and this beautiful and troubled planet - to the California record label Jumpsuit Records (Ayla Nereo, The Polish Ambassador) many of Samara’s songs have spread far and wide (much like the helicopter seeds of maple trees - not coincidentally, called “samaras”), and she is honored to follow in their footsteps.

At heart a writer and poet, Asheville songwriter Noah Proudfoot has been penning an endless stream of songs, dating back to his days playing punk rock in high school bands. Studded belt aside, he now finds his voice most at home in the genres of funk, soul, and roots music. His lyrics often tell of characters who find redemption amidst the struggles and hardships of life, and discover the things that matter most in life- right relationship with the self and with others. He's released two albums thus far, one solo and one with his funk rock band, 'Noah Proudfoot and the Botanicals' (which Samara sung on!) In the last year, he and his band have been fortunate to see their hard work paying off, with the opportunity to headline festivals and open for bands such as Yaima and Satsang. Now with the festival season winding down, Noah returns to his home studio where he is working on his first solo album since 2016. The collection of songs will be an experiment in new sounds and production styles, diverging from traditional songwriting and playing with elements of indie, electronica, and dance music. You can follow his musical journey on instagram at @proudfootmusic or on his website at www.noahproudfoot.com