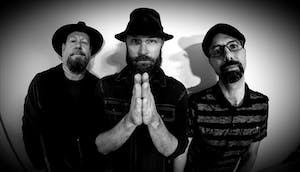 iCal
Google
Ross Osteen Band returns to The Grey Eagle in Asheville NC for another scorching night of the blues! Seth Rosenbloom Band opens the show.

With a voice that summons the guttural howls of John Fogerty, and guitar work that ranges from the front porch to outer space, Ross Osteen joins the powerful blues/rock scene of the deep south. The songwriter was born in western North Carolina placed in the midst of an eclectic music scene ranging from bluegrass to rock, and beyond. Eventually all of his influences aligned to form his bluesy sound, and he hit the road. Ross has played blues shows with notables such as Jimmy Thackery, and Kim Wilson of the Fabulous Thunderbirds. He also shared the stage with legend Buddy Guy. There’s no doubt his style of musical soul searching will allure listeners.

Let’s not forget the driving pulse of the band, Patrick Gaynor. Growing up in New York, he was constantly pulled in by the hypnotic southern sound of the Allman Brothers. A sound which lures listeners in on songs like “Fools Gold” off of their album titled “Glenhead Station”. Patrick eventually moved south to find a band that could satisfy his blues cravings.

The Ross Osteen Band is fully anchored by the distinct force of Andy Bishop on bass. Andy is a multi-instrumentalist and owner/operator of Giraffe Studio for many years. He is the perfect complement to this power trio, and his contribution really heightens the music.

Since the Ross Osteen Band started in 2014, they have played a number of shows from Georgia to New York to Chicago, with a very memorable appearance with Buddy Guy on one of their songs titled “Hold Back”. All the while, growing a local fan base in western North Carolina. They released their self titled album in 2015, followed by their second release “Glenhead Station” in 2016. The band just released their latest single “Mannish Boy” from the upcoming album “Williwaw”. Ross Osteen Band continues to hone their sound into an energetic blend of blues, roots, and southern rock.

“For me, playing the blues is all about expressing emotions,” guitarist and vocalist Seth Rosenbloom insists. “What’s always drawn me to the genre is the fact that it allows for an extraordinarily wide range of emotion. That, I think, is the key to making great music overall, and great blues in particular.”

Rosenbloom knows of what he speaks. Hailed by The Boston Globe as “a searing blues-rock guitarist,” and The Noise Boston as a musician who “makes his guitar growl and has a voice to match,” he’s been compared to “a slightly younger and rawer version of Matt Schofield ,” by the Blues PowR blog, which also praised him for “his gravelly, forceful vocals and stinging guitar work.”

Those assessments were affirmed this past year, when Rosenbloom made his bow with his debut self-titled EP. Now, with the release of his first full length effort, Keep On Turning (January 18, 2019), he shows again why he has been referred to as the future of blues guitar. An assertive and authoritative artist and auteur, he demonstrates confidence and credence with a set of songs that sounds every bit like a new set of standards. He executes the material in ways that are both riveting and embracing, with his dynamic delivery ensuring an emphatic impression.

Although firmly entrenched in the blues, Keep On Turning reflects a distinct diversity in the range of sentiment, as expressed in a selection of songs composed by Rosenbloom both on his own and with co-writer Sonya Rae Taylor. He also includes classic covers of B.B. King, Elmore James and Freddie King. From the emphatic wail of “Keep On Turning” and “Right About Now,” to the drive and determination of “Crawling Back” and “I Can’t Help It,” Rosenbloom’s passion and authenticity are on display throughout the album.“

This album is the culmination of everything I’ve ever aspired to musically,” Rosenbloom reflects. “I really wanted the album to represent the diversity that the blues has to offer, and I’m so pleased to have worked with such a wonderful producer and group of musicians who helped bring it to fruition.”

Then again, Rosenbloom’s no stranger to making music. Born into a musical family and raised in Waltham, Massachusetts, he began playing classical violin as a child and subsequently took up guitar at age eleven. Initially inspired by the music of Elvis and The Beatles, he earned a performance merit scholarship from Berklee College of Music by the time he was 16.

After spending a few years as an active sideman and in demand clinician, Rosenbloom stepped into the spotlight with the release of his self-titled EP in September 2017. He supported the recording with a string of tour dates up and down the East Coast, demonstrating at each stop his clear commitment to his craft and his ability to enthrall his audiences with his verve and versatility.

Rosenbloom has further expanded his reputation by spending much of this year on the road as well, introducing himself to his newly enthusiastic audiences. Whether demonstrating his dazzling guitar riffs and stinging vibrato, or emoting with his soaring and sultry vocals, he brings a distinctive power and personality to each of his performances. Now, with the release of Keep On Turning, he underscores that ability to add several specific hues to the blues.