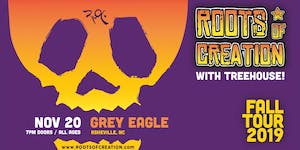 Whether on the festival circuit, performing at jam and reggae-rock favorites like Camp Bisco, Gathering of The Vibes, California Roots, Jungle Jam and Closer to the Sun, or sharing the stage at sold out shows with some of their diverse influences including Slightly Stoopid, The Wailers, and Michael Franti, reggae/rock/dubtronica band Roots of Creation (RoC) offers up a high-energy, infectious live music experience. Their mix of reggae riddims, conscious lyrics, spirited horn lines, and electronic beats makes crowds move and has their loyal underground fan base (RoC Family) and street team (Universal Soldiers) travelling the distance to pack venues from coast-to-coast.

Now RoC has taken on a unique new project: Grateful Dub. Combining their longtime love for reggae-dub style music and the Grateful Dead, RoC reworked some of the world’s favorite Dead tunes into a new studio album. RoC had the pleasure of working in the studio with the legendary 5-time Grammy winner Errol Brown who was Bob Marley’s engineer and now Rebelution’s live sound engineer for this project. Grateful Dub is also being performed live in its entirety at festivals, theatres, and clubs around the country, and features rotating special guests including Melvin Seals (JGB), Scott Guberman (Phil Lesh) full horn sections, and others. Grateful Dub captures the spirit and magic of the Grateful Dead, while laying it down reggae-dub style.

For seven years, TreeHouse! (Myrtle Beach, SC) has spent the majority of their days blazing sprawls of highway and their nights playing an unapologetic enthusiastic blend of psychedelic reggae jam rock they are known for in venues across the nation.

TreeHouse! songs resonate in your soul with lyrics of rising above adversity, the power of gratitude, and the importance of unity. For every setback, there's a step up waiting for you if you keep your focus. For every day, there's a blessing to count and for every event, we must recognize we are a part of it all. It's this kind of message that makes the most recent studio album, Lifted, their strongest release to date.

In 2010, singer/guitarist Jeremy Anderson and drummer Trey Moody formed the foundation of American Reggae Jam Rock band TreeHouse! With a vision and a dream, they jumped into a van to travel the country and share their good vibes. Along the way they picked up fellow band members, Joe Harley on Keyboards/Theramin/Vocals and Chris Hat on the bass.

Throughout the years, the band has collaborated with other up and coming artists in the genre including Sun-Dried Vibes, Oogee Wawa, Roots of a Rebellion and others, all the while discovering a like minded community across the East coast and beyond.

After teaming up with musical inspirations like Steel Pulse, 311, The Wailers, Dirty Heads, Pepper, Stick Figure, Fortunate Youth and SOJA along their journey and in the spirit of the bands who laid the road before them, these road warriors continue to spread their roots coast to coast.

The TreeHouse! single, "Blessings" was picked by Stephen Marley and Ky-Mani Marley as one of the top 10 songs out of hundreds of contestants in the Marley's Music Uprising, because they felt this song exemplified the spirit of Bob Marley.

"The live show itself heals me every night. I write these songs, to some extent, for my own sake. If I am to sing this song every night, I try to make it beneficial for my own being and implant within it a message that I may need to hear, myself, for reassurance in my journey. Whenever we are feeling overwhelmed with our path, someone comes like a messenger from the universe and feels the need to express how much we’ve affected their life for the better, just by doing what we do. That’s what always keeps us going."

TreeHouse! recently released two singles, "Prayer for the Day" and "Natural High (ft. Dan Kelly)" to much acclaim and is currently in the studio working on a new album to be released in 2019.