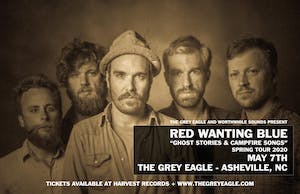 iCal
Google
Red Wanting Blue returns to The Grey Eagle in Asheville NC on September 23, 2021 in support of their new album "The Wanting."

“In every odyssey, there comes a time when you must accept that what you are pursuing is no longer a rational decision,” Scott Terry writes in the liner notes of Red Wanting Blue’s new album, ‘The Wanting.’ “It’s a choice that does not feel like a choice. It is a hunger.”

It’s been more than twenty years since Red Wanting Blue first began their long, strange odyssey, and while much has changed for Terry and the rest of the band over those two remarkable decades, the hunger remains. Like the North Star, it’s fixed in the firmament, a guiding light perpetually out of reach. Hunger has been their fuel, their motivation, their essence. Hunger has steered every step of the group’s extraordinary journey, and now, it’s at the heart of their most powerful record yet. Produced by acclaimed singer/songwriter Will Hoge, ‘The Wanting’ showcases Red Wanting Blue at their finest, with Terry’s epic, heartfelt vocals soaring above the band’s gritty, driving rock and roll. Alternately triumphant and melancholic, the songs are both muscular and nuanced, equally at home blasting from a car stereo as they are drifting through a pair of headphones late on some lonely night. Though the record draws on many of the band’s traditional strengths—indelible melodies, infectious hooks, explosive performances—the making of it pushed Red Wanting Blue far outside their comfort zone and forced them to take an unprecedented, nearly year-long break from touring.

“We’re a touring band,” Terry explains matter-of-factly. “We’re on the road all the time, so much so that it’s painful when we’re not. When I was younger, I used to get heart palpitations if I was in the same place for more than four days.”

It’s that insatiable appetite for the road that helped Red Wanting Blue establish themselves as one of the indie world’s most enduring and self-sufficient acts. Hailed as “Midwestern rock heroes” by American Songwriter, the band has spent most of their career operating outside of the confines of the traditional music industry, earning their legion of lifelong fans through decades of relentless touring. Over the course of ten studio albums, they brought their passionate, unforgettable live show o every city and town that would have them, blazing their own distinctive trail through the American heartland as they built up the kind of fanatically dedicated audiences normally reserved for arena acts. Along the way, they notched appearances everywhere from Letterman to NPR and climbed all the way up to #3 on the Billboard Heatseekers chart. In 2016, they celebrated with a 20th anniversary retrospective album/concert film entitled ‘RWB20 Live at Lincoln Theater,’ which captured the band in all their glory at a sold-out hometown show in Columbus, OH.

Despite the group’s distinctly Midwestern beginnings, the origins of ‘The Wanting’ lie not in Ohio, or even in Brooklyn (where Terry currently resides), but rather in Mexico. It was there, on a day off during the band’s sixth annual trip aboard the Rock Boat cruise, that the seeds of collaboration with fellow performer Will Hoge were sown. “We’ve gotten really close with Will over the years, and on that trip he basically just said, ‘I think we should make a record together,’” remembers Terry. “He told me, ‘I’m a fan of your live show and I get the energy that your band is about, and I feel like if you give me the darts, I’ll get closer to the bullseye than any other producer you’ll meet.’”

The band decided that if they were going to switch things up and work outside their own studio, then they were going to go all in. For the first time ever, they cleared their touring schedule for the better part of a year to focus solely on writing, recording, and mixing the most fully realized material of their career. Hoge made multiple preproduction trips to Columbus while the band rehearsed and recorded pre-extensive demos, and when it was finally time to cut the album, they headed south for their first studio sessions in Nashville, TN.

“We made the album in the big room at Sound Emporium,” says Terry. “We were like kids in a candy shop in there. We’d gotten really used to recording in our warehouse studio in Columbus, and suddenly we didn’t have to worry about any of those old limitations any more. We had this big beautiful space where we could all play together live, and we knew exactly what we wanted to do as soon as we got in there.”

One listen to ‘The Wanting’ and that clarity of vision is immediately apparent. The record opens with the rousing “High and Dry,” a feel-good rocker that also serves as something of a mission statement for a fiercely independent group that’s as much a band as they are a family, with Terry singing, “I want to stand on my own two feet again / And when I mess up / That’s when I hope my friends will pick me up.” On “Ulysses,” the band channels early Phil Collins with pulsing synths and larger-than-life drums, while the tender “Glass House” crescendos from a delicate whisper to a triumphant roar, and the dreamy “I’ve Got A Feeling It Hurts” calls to mind the hypnotic drive of REM mixed with a touch of Jayhawks jangle.

“This is really the most collaborative album our band has ever made,” Terry says of the wide range of influences. “It’s the first record where every member really contributed to the writing, which is a huge deal because the music got so much better. It’s everyone’s voices this time, and I feel like we all matured as writers because of it.”

“Younger Years” offers a dose of youthful confidence that absolutely begs for an audience sing-along, while “When We Choke” and “This Is The End” both spin dark takes on the weight of love, but perhaps the emotional highlight of the album comes with “The Real Thing,” a passionate ode to the present.

If it’s hunger that drives Red Wanting Blue, then it’s love that sustains them: love for the band, love for their fans, love for the journey. After all, desire is nothing without love, and ‘The Wanting’ is nothing if not a testament to the power of desire. "It is beyond reason that the heart wants what it wants...yet still it persists,” Terry concludes in the liner notes. “I imagine wherever there is the breath of life....with it will be the wanting."

Anthony D’Amato didn’t know a soul when he landed in New Orleans. Within weeks of his arrival, though, he was collaborating with some of the city’s finest songwriters and instrumentalists on a spontaneous project unlike anything else in his catalog.

“This whole experience really caught me by surprise,” says D’Amato, a New Jersey native who now calls New York City home. “I came to New Orleans for a housesitting gig in between tours, and I ended up writing and recording a whole new collection with a whole new band and a whole new sound.”

Captured almost entirely in the living room of an historic 1860’s Garden District home, ‘Five Songs From New Orleans’ feeds off the Crescent City’s irrepressible creative energy and draws inspiration both from its stately beauty and its haunted decay. D’Amato engineered, produced, and mixed the whole EP himself, treating the songs as raw, unfiltered snapshots of his time in town, and the performances documented here are loose and improvisatory to match. The end result is a spare and organic collection, one that’s comprised exclusively of acoustic instruments and draws on an eclectic array of New Orleans sounds, from Cajun fiddle to blues guitar, from Dixieland clarinet to washboard shuffle, from classic country to fingerpicked folk.

While each of the songs on the EP grew out of D’Amato’s experiences in New Orleans, some tracks are more explicit in their lyrical portraits than others. D’Amato spins an Ash Wednesday hangover into a metaphor for post-honeymoon love on the playful “Party’s Over,” imagines life after death in one of the city’s largest cemeteries on the bluesy “Metairie,” and uses New Orleans as a lens through which to examine the widening economic, racial, and political divides that have come to define modern America on the twangy “Some Folks.”

D’Amato first emerged to international acclaim with the 2014 release of ‘The Shipwreck From The Shore,’ his New West Records debut. Inspired in part by time spent studying with the Pulitzer Prize-winning Irish poet Paul Muldoon, the album garnered rave reviews on both sides of the pond, with NPR inviting D’Amato for a Tiny Desk Concert and lauding that “he writes in the tradition of Bruce Springsteen or Josh Ritter," and Uncut proclaiming that his songwriting "echoes with early Bob Dylan." D’Amato followed it up in 2016 with the Mike Mogis-produced ‘Cold Snap,’ which landed him his first national TV appearance along with an Artist You Need To Know nod from Rolling Stone, who hailed his “folk music raised on New Jersey grit.” In response to mounting humanitarian crises overseas and at our own southern border, D’Amato returned the following year with a collaborative charity EP titled ‘Won’t You Be My Neighbor?,’ which raised thousands of dollars for refugee aid. Songs from D’Amato’s solo albums, meanwhile, racked up more than eight million streams on Spotify alone and landed him headline and festival performances in the US, Europe, and Australia, as well as support dates with Ben Folds, Valerie June, Shovels & Rope, The Old 97's, The Felice Brothers, Tyler Childers, Langhorne Slim, and more.