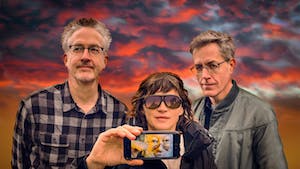 collective originally from the San Francisco Bay Area, have been creating records,

taken from corporately owned mass culture and the world around them, Negativland

things that they never intended to. In doing this kind of cultural archaeology and

"culture jamming" (a term they coined way back in 1984), Negativland have been

Over the years Negativland's "illegal" collage and appropriation-based audio and

media literacy, religion, death, the evolving art of collage, the bizarre banality of

suburban existence, creative activism in our media-saturated and multi-national

art and ownership and law in a digital age, and artistic and humorous observations of

While it is true that, after being sued, Negativland became more publicly involved in

advocating significant reforms of our nation's copyright laws (even finding

copyright and art issues), Negativland are artists first and activists second. All of

and perception in the United States of America. Their work is now referenced and

taught in many college courses in the US, has been written and cited about in over

150 books and legal journals, and they sometimes lecture about their work here and

with a few clicks on their smartphone, Negativland is still interested in unusual

noises and images (especially ones that are found close at hand), unusual ways to

restructure such things and combine them with their own music and art, and mass

media transmissions which have been sources and subjects for much of their work.

approaches whenever possible, and vital social targets of any kind. Foregoing

ideological preaching, but interested in side effects, Negativland is a subliminal

cultural sampling service concerned with making art about everything we aren't