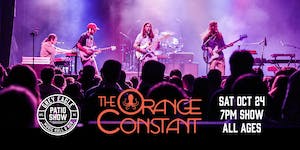 Formed in Georgia in 2012, The Orange Constant creates vintage rock with a contemporary twist. The group’s sound ranges from southern psychedelia to progressive composition — all with a spontaneous yet pop-like sensibility.

March 2017 saw the release of Point of Reference, which was recorded in Athens, Ga. and produced by Drew Vandenberg (of Montreal, Kishi Bashi, Futurebirds). Fueled by Vandenberg’s experimental leanings, the sophomore effort displays maturity in songwriting and embraces more risktaking in the studio. The LP demonstrates an urge to break genre restrictions as it draws inspiration from 70’s AOR and contemporaries like My Morning Jacket. Nearly one year after its release, Point of Reference earned the band a second feature in Relix Magazine through its notably “lush soundscapes and clear, purposeful compositions.”

In the fall of 2018, the group returned to Keane to record what would become its third full-length release. Peel came in May 2020 and solidified TOC’s sonic spectrum; heartfelt anthems with catchy choruses ride alongside instrumental mastery with psychedelic undertones. With its rich vocal harmonies, hooky riffing, and succinct songwriting, the album embellishes much of what Time to Go sought and captures the band’s most current sound.

The Orange Constant thrives on creating songs that differ from one another and possess their own inspired character. The band consistently tours the American East and shares bills with acts such as Perpetual Groove, TAUK, Pigeons Playing Ping Pong, Ripe and CBDB. The group is: Andrew Brantley (guitar/vocals), Nickalous Benson (guitar/vocals), Tyler Walker (bass/vocals), Chris Freiberg (keyboards) and Sam Groveman (drums).