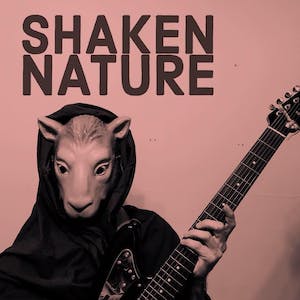 Shaken Nature will be donating all of their proceeds from this show to benefit Asheville Survival Program.

Shaken Nature is the sick, strange story of four young highwaymen who found themselves stranded in the Appalachian wilderness of Asheville, North Carolina. Rather than left for dead, they decided to trade in their buckskins and Winchesters for fender guitars and vintage pearl drums. Fans of The Velvet Underground or Brian Jonestown Massacre are bound to love with this crunchy, psychedelic, big-hearted Rock n’ roll band. The band is quoted in saying their genre is somewhere between “Outlaw-Psych” and “Post-Punk Gospel.”

Shaken Nature is led by guitar playing duo Miles Constable and Benito Rose Plaza. Plaza hails from the west and was involved with some great bands in Austin, TX (i.e. Annabelle Chairlegs). Constable gained notoriety in Tallahassee, Florida where he played in heavy garage rock group “The Royal Heavies” and swampy fuzzed out band “Black Cloud”. The two met shortly after moving to Asheville in 2016 and formed the preliminary bones of the group which would become “Shaken Nature.” Tyson Phillips would come to join as drummer in 2018 and Sean Miller on bass a few months after. Their first show with the current lineup came in early 2019 at the legendary “Grey Eagle” in Asheville, opening for world renowned psychedelic ensemble “Night Beats.”

The band has an unhinged energy and a way with charming crowds. After gaining attention at Hopscotch Music Festival in Raleigh, NC, 2019. The group has been promoting their first E.P. entitled “SHKNTRE” and numerous single releases. A special connection amongst their fans and friends (mostly in the southern states) is what keeps this group striving ahead. Check out for their latest single “Pony Donʼt Cry” on any streaming service. Or, their music video “Be my Eyes” where one can witness a raw, energetic 8mm piece which brings up memories of an early nineties Beastie Boy’s aesthetic. The video was listed in POW magazines top 50 videos of 2018.

As the days of live music are feeling dismal in the time of COVID-19, Shaken Nature is currently hunkered down in their home studio/ headquarters, “Love Baby Records.” Producer and guitar player Benito Rose Plaza stays busy recording groups such as John Bias Simplicity, Good Trauma, and Rude Dude and the Creek Freaks. These acts are actively working under the Shaken Nature/ Love Baby Records label which was founded by the band in 2018. Shaken Nature continues to pump their singles and soon to be first full-length LP out of this Asheville North Carolina based, analog “rock n roll” studio.

As the group treads the water of 2020 and continues to promote their music, they are aware of the distressed future for all current musicians… The band is using this time to pursue their higher creative potential and create great new music. Shaken Nature is ready to heed the call and push onward into global recognition for years to come. Let’s take a moment to listen, can you hear the music? Will you join the Shaken Nature Family? God can only hope so.

The very first full-length Shaken Nature album is set to be released in November, 2020.